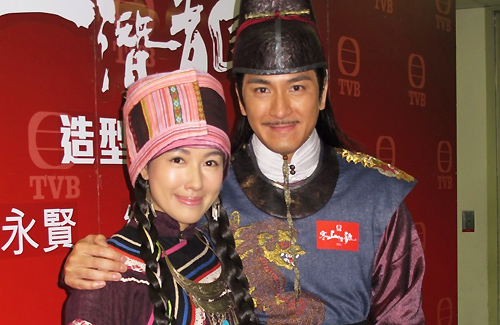 On May 23, Kenneth Ma (馬國明), Selena Li (李詩韻), Lin Xiawei (林夏薇), and Power Chan (陳國邦) attended the costume fitting for TVB’s new ancient drama, Cold Mountain, Hidden Dragon <寒山潛龍>. After Aimee Chan (陳茵媺) suddenly rejected filming the series, Xiawei was told to take her role as a martial arts master. Xiawei is glad and thankful of the opportunity, since it is her first time filming a historical series.

Rumors speculated as to why Aimee suddenly rejected Cold Mountain, Hidden Dragon. According to Aimee, her mother’s health is unwell, and she needs to fly back to Canada to take care of her. Boyfriend, Moses Chan (陳豪) will also join Aimee in Canada. Allegedly, the couple is planning a secret wedding, and this is a chance for Moses to consult Aimee’s mother. Other tabloids claimed that Aimee may have become pregnant. When questioned about this, Xiawei replied that she does not know anything regarding Aimee’s leave.

Last week, Xiawei, Raymond Lam (林峯), and Karena Ng (吳千語) flew to the United States to attend the graduation ceremony of Raymond’s younger brother at the University of Southern California. Speaking of how Raymond neglected her and directed his full attention at Karena during the trip, Xiawei laughed and said she preferred to carry her own luggage anyway.

Selena Will Consider Kenneth as a Boyfriend?

In the new drama, Kenneth will portray Selena’s husband. He laughed and said he will ask for an intimate bed and kissing scene, in order to better display the couple’s loving relationship. Afraid that Selena will reject the idea, Kenneth said he would try his best to persuade her. Selena expressed that if she is still single five years later, she will consider Kenneth as a boyfriend.