Actresses Who May Have Had Breast Implants 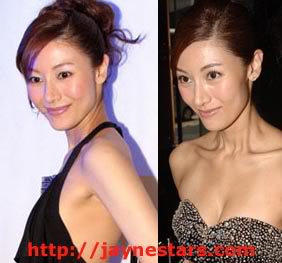 Not as common as in Hollywood nor Japan, breast enlargement among Hong Kong and Taiwanese celebrities are often more discrete. While slim figures are equally admired in Asian cultures, some female celebrities have sought to enhance their curves by going under the knife.

Slimming products may promise chest enhancement (as touted by many actresses who endorse them), but honestly, would such a miracle product really exist? So female celebrities who want a permanent enhancement have gone through the old route of breast implants.

Take a look at the photos and decide if it is miracle underwear or something else?

Michelle has always had a beautiful face and willowly figure. In the above photo, if you compare the before and after effects, there is a noticeable difference in her cup size. Many of Michelle’s recent photos show off her new cleavage…hey if it cost that much money to get it, might as well flaunt it. Leon Lai Ming’s wife, model Gaile Lok, is among the very few celebrities who has openly admitted to getting implants. Gaile had the operation done in 2005.

Cecilia is a tricky case; she started in the industry with a very healthy and fit body. But around 2002, Cecilia lost a lot of weight and much of her prior curves. She wore a lot of layers and thick clothing during that time-frame to make her weight loss less apparent, so there are not many clear photos of her figure. But soon after, without gaining back too much additional weight, her curves came back. I found the above photos, but if I am mistaken about Cecilia in putting her in this feature, then I apologize. Nina was a famous actress in the late 1980’s. The above left photo is of her during ATV’s Miss Asia contest. While she had a very fit figure back then, a few years after the contest, there seems to be a visible enhancement. Nina was a budding actress, often playing the siren, in her movies. I guess she got the enhancement to further her career. But it was rumored that Nina made some poor investment decisions and lost a lot of her money. She met Jet Li around the same time and they fell in love deeply, with Jet filming movies to help Nina pay back her debts. After Jet and his first wife divorced, he and Nina married in Los Angeles, USA and Nina retired from acting. Her curves these days seem to have gone back to her prior size before the implants. Coco has always claimed that her current assets are natural. But there are just as many rumors that she allegedly had a lot of cosmetic surgery on her body and face. If you search for old photos of Coco, you will notice the difference. In the above left photo, while Coco had a nice figure back then, her curves are more pronounced these days. Teresa and her ex-husband, Kenny “B” Chung Chun To divorced on very bad terms. Allegedly, Teresa was cheating on Kenny at the time and was caught by the media meeting up with another man in a hotel. Despite filing for bankruptcy (as Kenny had done due to poor real estate investments), Teresa has been quoted that even if she has no money to buy food, she will still need to buy her designer clothing. Teresa is once again a gossip magnet when she got implants and at 42 years old, appeared in a category III film in 2005 in full nudity. Nevertheless, the film did poorly at the box office. Before Chiling Lam underwent various “enhancements” on her face and body, not many people have heard of her name. She gained widespread recognition after endorsing a slimming product. Chiling is rumored to be dating F4 member, Jerry Yan. Also in 2005, Chiling fell from a horse while filming an ad. She was hospitalized for a lengthy period, allegedly because her saline breast implants had burst during her accident. Now Chiling has “recovered” and in 2005 pulled in the 3rd highest income among Taiwanese celebrities. Another top model in Taiwan, Pace has been getting a lot more public attention lately because of her curvier figure. Following Lam Chiling, Pace is another model who has enhanced her curves. Amy Yip started her career in ATV and wishing to reach greater heights, chose to get breast implants. Her Dolly-Parton like body led her to become a highly sought after actress in the 1990’s. Amy acted in several of Stephen Chow’s old movies.

6 comments to Actresses Who May Have Had Breast Implants