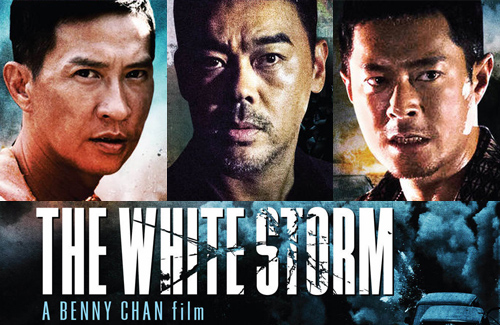 The epic crime film tells the numbing story about an undercover cop (Louis Koo) who travels to Thailand and Macau to sell a variety of narcotics. The undercover cop works closely with a Hong Kong Narcotics Bureau inspector (Sean Lau) and his subordinate (Nick Cheung), who follows the cop to Thailand.

After over six months in production, The White Storm, previously touted under the names The Cartel War and Metamorphosis, finally wrapped up its filming in Hong Kong. With the final shoots being major action sequences, the three main heroes sustained quite a few physical injuries.

During a fight scene with a Thai boxer, Louis injured an old wound on his right leg. Director Benny Chan suggested getting a stunt double to replace Louis to complete the sequence, but the actor insisted to do the stunts himself. After the shoot, Louis said, “I am a perfectionist when it comes to my job. I can deal with injuries, but I cannot deal with regrets.”

Sean, on the other hand, almost injured his eyes after an explosion scene when the debris almost grazed his eyes. Nick’s head and back were covered with scratches and bruises after he was dragged across a road flooded with shattered glass and wood.

When the shoots ended, Benny Chan and the crew applauded, thanking the three stars for their professionalism and spirit. “They knew about the dangers but still insisted to do the scenes themselves. I am grateful.”

The White Storm was filmed primarily in Hong Kong, Macau, and Thailand. The film’s first trailer was revealed at the Cannes Film Festival last month, which was followed by the unveiling of its first official teaser poster. It was reported that many international investors wanted to take part in distributing the film.

“The White Storm is not just an expensively laid-out action film, but also a film about camaraderie and love between the three best friends,” said Benny Chan.

The White Storm is slated for a late 2013 release.