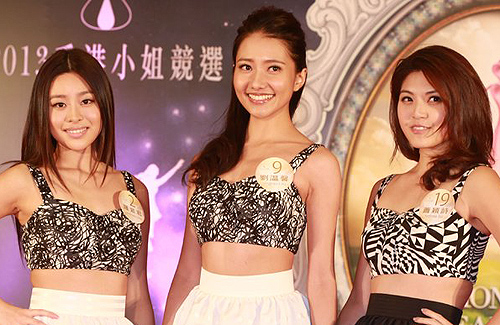 The 20 official contestants competing for the 2013 Miss Hong Kong crown made their appearance at the press conference held on July 4.

Following a stringent preliminary selection process and a second round of interview, 17 local beauties and 3 overseas contestants were selected by judges. Media favorites, #9 Virginir Lau (劉溫馨) and #15 Sisley Choi (蔡思貝) made the final cut. The overseas contestants include #12 Karen Leung (梁家欣) from Scotland, #10  Michelle Liem (林伊麗) and #19 Natalie Sui (蕭穎詩) from the United States.

Following last year’s Miss Hong Kong pageant format, this year’s competition will also feature a reality TV show format, in which the winners will be determined by public votes.

Through the drawing of lots, the contestants drew out their numbers as well as the cities where they will travel to for their outdoor photography shoots. The scenic cities that were chosen are Paris, Seoul, Moscow, Beijing, Athens, Taipei, Bangkok and Chaozhou. The 20 beauties will leave for these cities next Sunday.

The list of the 20 contestants and the cities they will be heading to are as follows: