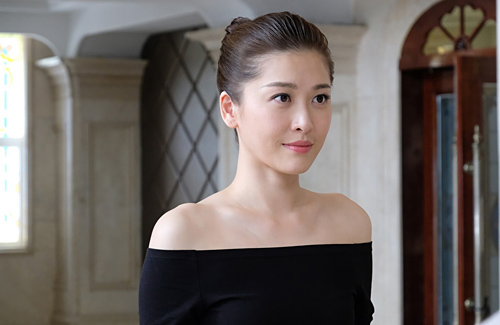 With her youthful charm and smooth skin, it is difficult to believe that Niki Chow (周麗淇) is already 39 years old. In the currently airing Another Era <再創世紀>, Niki convincingly portrays a young girl in her early twenties. To this praise, Niki humbly responded, “I think portraying a young girl in this drama is already pushing it. Soon, I won’t be able to portray these characters anymore. I purposely cut my bangs straight so I could appear younger too!”

On how she keeps her youthful looks, Niki shared her own skincare secrets, “You definitely have to be mindful of your eating habits and lifestyle. Maintaining a positive mood is the most important thing. I’m a really positive person. A person needs to keep a young mind and things simple. I also like to eat, but I only enjoy eating healthier foods like yam, radish, konjac with vinegar, and Chinese yam. I don’t like eating oily, fatty, or sugary foods, such as ice cream or other western desserts. I’ve been working a lot in Mainland China these past few years, so I developed a liking for spicy foods. Even then, I wouldn’t eat too much of them.”

Surprisingly, Niki is also a firm follower of ancient Chinese herbal medicines. She has read the “Esoteric Scripture of the Yellow Emperor”, which is an ancient Chinese medical text that has served as a source for Chinese medicine for more than two millennia, and is well-learned about Chinese herbs, medicine, and nutrition. “I like to prepare soup and drink it when I’m out and about, such as Chinaroot soup and lentil soup. I also like to brew tea. When I film in Mainland China, I would make soup and cook dinner for myself, so I’m quite a good chef! Every morning, I would have rice or porridge. Then I would have anything I wanted for lunch. After 7 p.m., I would reduce my intake of starch. I have given up cold drinks for many years now. I also take a lot of supplements.”

In addition to nutritional intake, Niki also has an active lifestyle and exercises consistently, mainly focusing on toning her body. “I stretch every day. When I have time, I’ll go hiking, running, or go to the gym. I go to the gym two or three times a week.”