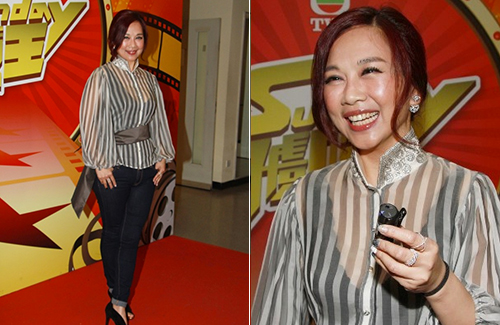 Long time no see, Adia Chan (陳松伶)! Yesterday night, the Song Bird <天涯歌女> actress was spotted in TVB’s Tseung Kwan O studios to shoot an episode of the game show Sunday Stage Fight <Sunday好戲王> as one of the show’s judges. With bloated cheeks and a fuller body, Adia was almost unrecognizable.

The 45-year-old acknowledged this and even took a stab at herself. “There is some minor swelling on my face,” said the actress. “The weather’s been rather humid lately. I absorbed all the water like a dehumidifier! But this will all be gone eventually. I’ll do more jogging and exercise. But yes, even my husband did not recognize me! I’ve already gotten skinnier—imagine how I was like before! Even more people would not recognize me.”

Adia Chan will be back next month to shoot a new TVB drama, playing a housewife. This would be the Song Bird star’s first primetime Hong Kong television drama since 2006’s Trimming Success <飛短留長父子兵>. Reportedly, Adia will play opposite John Chiang (姜大偉) and Vincent Wong (王浩信) in the new TVB drama.

“I’ll use this opportunity to lose more weight,” said Adia. “I hope to lose about ten pounds.” Asking if Adia would be portraying a housewife in the new series, she joked, “If TVB wants me back they have to give me a beautiful woman role! But jokes aside, I am interested in this housewife role. The Hong Kong audiences haven’t seen me in a while; hopefully I’ll be well-received. My friends told me to beware of the netizens, but I don’t think they’re that bad. A lot of them are quite nice.”