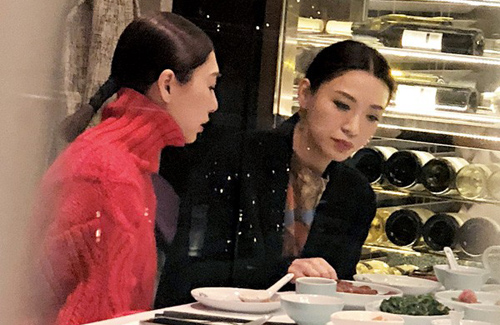 Although Alice Chan (陳煒) lost out to Ali Lee (李佳芯) for the TV Queen award at the 2018 TVB Anniversary Awards, she instead won the Favorite Actress award. Due to her versatile acting and convincing portrayals in all her roles, Alice is widely considered to be the public’s TV queen. With such support and encouragement, Alice remains positive about her career outlook at TVB.

After the awards ceremony, Alice treated the cast and crew of Deep in the Realm of Conscience <宮心計2深宮計> to dinner. However, female lead Nancy Wu (胡定欣) was noticeably absent. Although many jumped to the conclusion pointing to their rivalry, the duo was spotted later having dinner together.

Alice and her assistant arrived first and secured a table. Not long after, Nancy strode in and the two appeared to be friendly and deep in conversation throughout the meal. Reporters noted Alice’s hospitality, often conferring to Nancy about dishes to order and placing food on her plate. As a two-time TV Queen winner, Nancy perhaps gave Alice many pointers on how to navigate her way around TVB.