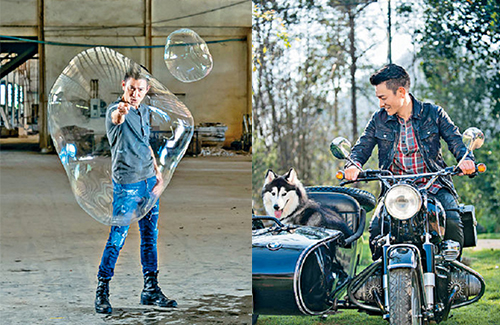 Andy Lau (劉德華) showed his enthusiasm and professionalism for his craft when he shot an outdoor commercial in Thailand under 40C (104F) weather. Despite having to stand around the sweltering heat, Andy stayed happy and positive, and even fooled around with his acting partner, a young Husky dog!

Earlier, Andy traveled to Thailand to film a commercial for a tea brand. He had to endure the challenge of shooting outdoor scenes under the hot and humid 40C weather. In one scene, he had to make large soap bubbles. In another scene, he had to drive around in a motorcycle with his Husky friend in the passenger’s seat—while wearing a black leather jacket.

But despite the intense heat, Andy didn’t show any signs of difficulty. Before shooting the scenes with his Husky friend, he made sure to spend some interacting with the dog beforehand so filming would go by more smoothly.

Andy said he practiced his arm movements a few days prior to doing the soap bubble scene. He amazed the staff when he successfully made a giant soap bubble the size of a balance ball. If time allows, Andy said he would love to attend the Songkran Festival and perform the water rituals with the staff!