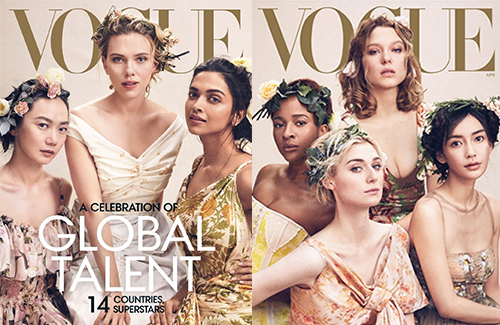 Angelababy is one of the first Asian stars to be on the cover of the American Vogue.

The other Asian star sharing the spotlight with Angelababy is South Korean actress Doona Bae.

It is the first time in 127 years of American Vogue’s history to feature that many talents for one edition.

While this is a great achievement for Angelababy, many Chinese netizens are questioning the 30-year-old’s qualifications to be on the cover.

Netizens explained that compared to other actresses on the cover, Angelababy does not have a representative work in film. While Scarlett Johansson’s credits include Black Widow from The Avengers film franchise and Doona Bae has multiple Best Actress wins, Angelababy’s representative work is Keep Running <奔跑吧兄弟>, a variety show. Foreign media also likes to dub Angelababy as “the Chinese Kim Kardashian.”

“She’s not a suitable actress to represent China,” said netizens.

Angelababy is the first Chinese star to be on the cover of Vogue, but not the first to be featured. In 2005, Gong Li (巩俐) and Zhang Ziyi’s (章子怡) interviews for Memoirs of a Geisha were published in the December 2005 edition of Vogue.