Angelababy Smokes With an Injured Finger 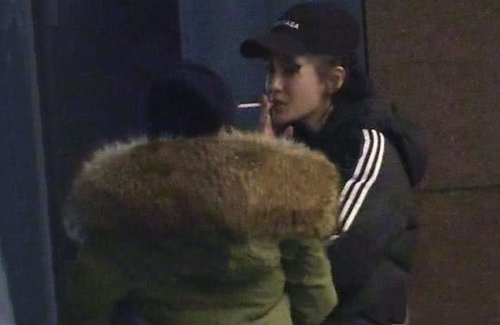 People say it takes 21 days to break a bad habit, but that hasn’t been the case for Angelababy.

Earlier, 30-year-old Angelababy (楊穎) injured her finger while filming a Mainland variety show and required a trip to the hospital. A few days ago, netizens saw her heading to a medical institution with a staff member straight from the airport. Although her left finger was fixed with steel plates, it did not stop her from taking a smoke break outside the hospital.

Despite her broken finger, she did not miss the opportunity to satisfy her smoking addiction. While waiting to pick up her medication, Angelababy squatted in the cold with her staff member to have a cigarette. Donning a cap and wearing a black winter jacket, the star was visibly quite experienced with smoking. At a quick glance, one can easily tell she’s been smoking for some time due to her mannerism.

The first time she was photographed smoking was in 2008. At the time, she publicly said, “Actually I haven’t been smoking for a long time, but people found out so quickly. I know smoking is not a good thing and I’ve been wanting to quit, so I’m even more determined to stop smoking after seeing the news report.”

Yet, 11 years later and it still hasn’t happened yet. Many fans urged the mother to be considerate of her son’s health. in fact, this is not the first time Angelababy was told by netizens to kick the bad habit. In 2017, reporters photographed Angelababy smoking an e-cigarette in the company of her friends, and was criticized for smoking.

5 comments to Angelababy Smokes With an Injured Finger