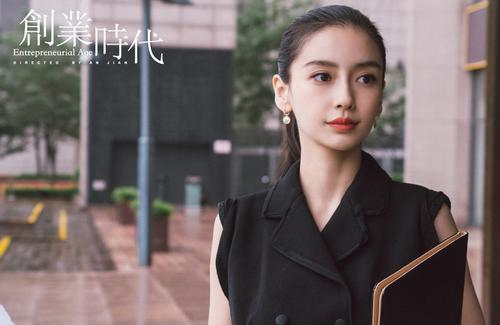 Entrepreneurial Age < 创业时代> is Angelababy’s comeback drama since giving birth to her son Little Sponge back in January 2017. The metropolitan romance, which premiered on October 12, stars Huang Xuan (黄轩) as a struggling software programmer who works on an app that converts text to voice messages before they are sent. Angelababy portrays his financial analyst and love interest.

As Angelababy’s first comeback drama and her first modern period piece, Entrepreneurial Age was highly anticipated. However, the 29-year-old model turned actress did not receive many positive reviews in regard to her acting performance, including remarks saying that Angelababy did not improve since her last drama General and I <孤芳不自赏>.

In the drama, Angelababy makes her first appearance as a financial manager leading a meeting. She was reportedly “unconvincing [and] wooden” and completely overshadowed by her supportive costars. Many netizens found it hard to believe that Angelababy had hired a professional teacher to train her acting.

Netizens also criticized Angelababy for only knowing how to do the same wide-eyed expression when she is trying to be angry or serious. Nonetheless, netizens did give her some praise for being able to recite her dialogue naturally.