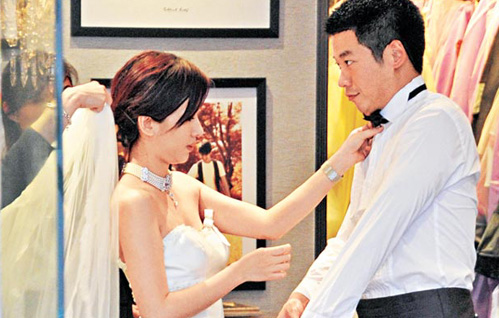 In 2008, Annie Man (文頌嫻) was photographed by the paparazzi passionately kissing a man named Jason in a car. Last Thursday, Annie and Jason were spotted on Thursday trying out wedding dresses in the Tsim Sha Tsui district. The couple will be getting married on March 2, 2011 at the Four Seasons Hotel!

Thirty-five-year-old Annie Man possessed a very low key manner. That year, Annie had broken up with her architect boyfriend of 10 years, after which she did not actively look for another relationship. It was not until November 2008 that Annie was spotted kissing a 30-something man (Jason) in a suit in a $500,000 HKD black Mercedes Benz car.

Last Thursday, Annie and Jason were spotted window shopping. Before long, the couple entered a bridal shop, upon which the sales clerks immediately greeted them. It appeared that Annie and Jason had an appointment to try on their wedding attire. Annie changed into a sexy backless bridal dress, which sparked the admiration of everyone present, including Jason’s fixated stare. Afterward, Jason tried on his tuxedo for the wedding. The couple loving fixed each others’ attire. In a telephone interview, Annie admitted that she and Jason were getting married. Asked whether she was currently pregnant, thus sparking the wedding, Annie laughed and said, “No! But if that were the case, then it was too early to confirm the pregnancy! I am trying to get married before Janet Chow (周家蔚) and Sherming Yiu (姚樂怡)!”

Annie revealed that she has been dating businessman, Jason, for 3 years.  Their relationship was very stable. “In fact, we had planned to get married at the end of last year, but we were unable to work out the schedule. After seeing many friends getting married recently, I took a more active role in planning our wedding.”

Annie’s bridesmaids will include Charmaine Sheh (佘詩曼) 、Angela Tong (湯盈盈)、Janet Chow (周家蔚) and Sherming Yiu (姚樂怡). Asked whether she will retire from the entertainment industry after marriage, Annie replied, “No, but I will reduce my workload, as I want to have a baby.”

Annie Man was once a rising star at ATV. In 2000, after switching to TVB, she was heavily utilized until TVB’s policy of promoting only contracted artists was administered. Annie turned her career to mainland China, fading from the Hong Kong television circle. After breaking up with her architect boyfriend, Annie met Jason at cousin’s social gathering.  When the press photographed Annie and Jason kissing in the car, the couple had just started dating. It was unexpected that their single kiss had locked their love!