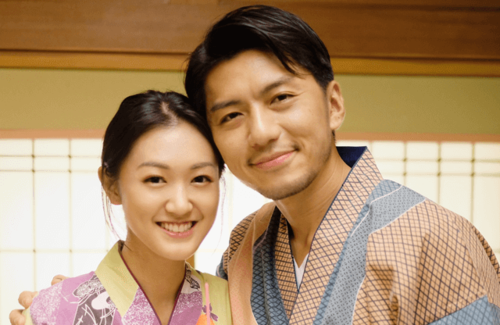 Couple Benjamin Yuen (袁偉豪) and Bowie Cheung (張寶兒) began their relationship in 2017 after falling in love in Africa while filming the travel show, All Work No Pay Holidays <打工捱世界>. Although the pair’s union was initially met with criticism, they’ve stayed by each other’s sides for the past two years, shielding each other from the rain. Having gone through the highs and lows in life together, Benjamin admits he already sees her as his marriage partner despite having a bit of a generational gap, as she is unfamiliar with Stephen Chow (周星馳)  movies and Beyond songs.

“When I’m down, she’s always by my side cheering me on even when I didn’t ask her,” Benjamin gushed. “Having known each other for two years, she is with me almost every day; it’s very rare to find such a good girlfriend. That allows me to think further – I think she has a great chance of accompanying me for the rest of my life because she accompanies me wherever I go.”

He happily shared she is willing to go play race cars with him and bravely asks to sit behind him when he rides his motorcycle. “For a person to support me, they don’t need to do too much – they only need to be my side,” he said. “In the past year, she went through some experiences that affected her work. But no matter what happens, I will be there for her. Not to mention, if she is being bullied, I will protect her.”

Having found one of his biggest supporters in life, Benjamin has been thinking about marriage lately, especially with the frequent marriage questions from the media. “I also want to have a family. Regrettably, my dad won’t be able to witness me getting married and having kids. I do want to get married, but before then I still need to put in more work to buy a big house. If I want to have kids, I also need to save money to let them have an education fund,” the actor revealed.

Inevitably, over Chinese New Year, their respective families rushed them to get married. “Everyone tells us to give out red envelopes next year, wishing us [to get married] and tells me to eat more lotus seeds [to have kids soon]. We just say, ‘Thank you, hopefully, it’ll come true,’ but we’ll follow our own pace,” Benjamin said.

He admitted he sometimes fantasizes about the moment he gets married and will casually bring up marriage during conversations with Bowie. “She would say, ‘I will follow, I will follow you!’ She’s very loyal and is ready whenever I am,” Benjamin dished.

In fact, he would not rule out the possibility of having an overseas flash marriage. Earlier when he had dinner with Priscilla Wong(黃翠如), she said she knew of some places to have an overseas marriage registration. “I personally have always to register my marriage overseas so I won’t rule out a flash marriage. Or one day I will lie to everyone and secretly fly to register for marriage, and only announce it when I return,” Benjamin hinted of his future plans.

4 comments to Benjamin Yuen is Thinking About Marrying Bowie Cheung