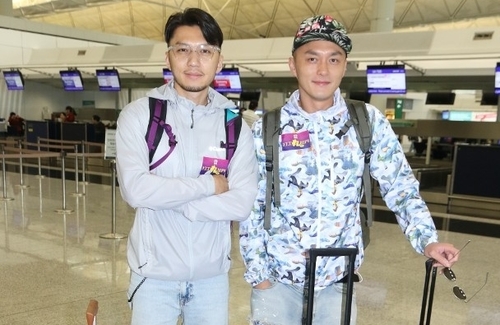 Having made their mark in India, Africa, and Italy, Benjamin Yuen (袁偉豪) and Mat Yeung (楊明) are about to take on Colombia for the third season of All Work No Pay Holiday <打工捱世界III>. The pair will be in South America filming the program for 18 days, so they’ve both made preparations. On one hand, Mat brought an abundance of food for their time in the tropical rainforest while Ben took along an empty container for the coffee beans he hopes to purchase over there. Meanwhile, their girlfriends have both reminded them to be careful.

Benjamin revealed his girlfriend, Bowie Cheung (張寶兒), is scared of him stepping on a land mine and jokingly asked if she meant the explosive kind or a pile of feces. “The director’s style is to abuse the artists by going to original places, and we like to be tortured. I heard that the most offensive criminals are no longer there, and the ones who got out of jail already turned over a new leaf,” Benjamin said. “We will go to a mine three hours from the city. Hopefully, we have a gun on hand so it’ll be safer. I just want something on hand, but actually even a bullet proof vest is useless in this case.”

For the show, the pair will work as miners to collect emeralds, as well as be a football commentator, sell ice cream, and headhunters in a modeling agency. Mat smiled and said Lisa Chong (莊思明), his girlfriend, told him not to be too naughty and go off running around with Ben. Ben chimed in, “The last time we went to India and went running, we saw a lot of men holding hands staring at us. We were afraid they were interested in us.”

Perhaps the duo will take things slow as Benjamin recently had a high fever after taking vaccinations and Mat also expressed he wanted to vomit after taking the malaria drugs.