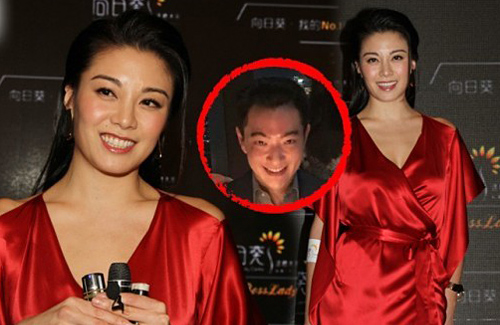 After breaking up with businessman Alastair Lam (林忠豪) due to media pressure, Bernice Liu (廖碧兒) has since kept her dating life away from the public eye. For the first time in years, the 39-year-old actress publicly confirmed her relationship status. While attending a commercial press conference, she admitted to dating 40-year-old CEO, Calvin Lo (盧啟賢) for the past several months. The couple met while doing charity work.

Once revealed, the relationship has been wrought with negative speculations. Calvin was once married and has a daughter with his ex-wife. Calvin was reportedly already in a relationship with a Thai woman named Nina, whom he broke up with after meeting Bernice. Did Bernice unknowingly become a third party? “No. From what I know, he was single. I don’t want to affect him. He is not in this industry after all. I’m very happy right now. He has one daughter. I’ve met her and we get along okay.”

Already 39 years old, is Bernice hoping to have children with Calvin? She responded, “I hope everyone will give me some time and space. If I have any good news, I will share with everyone.”

Recently, Bernice shared a photo of a ring on her social media, sending fans into a frenzy about whether she is engaged. When asked about the rumor and whether the couple is headed towards marriage, Bernice responded, “No, the ring is mine. Personally, I have always taken my relationships very seriously. I hope everyone will give us more time to get to know each other.”

On what attracted Bernice to Calvin, she praised, “He is a good person and very attentive. We both like animals too.” Since breaking up with Alastair, it seems that Bernice has not dated for many years. She clarified, “Don’t say that it’s been many years. I’ve met people in between all this time, but you have to get to know someone before seeing if you are compatible.”