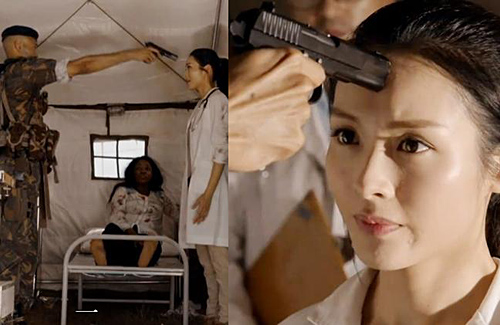 Spoilers ahead for the final episode….

Airing its finale last night, Big White Duel <白色強人> left viewers with a cliff hanger. Many suspect that the opening ending is paving the way for a sequel due to the popularity of the series.

After listening to Kenneth Ma’s (馬國明) advice, Ali Lee‘s (李佳芯) character goes to the United States for treatment for her cardiac tumor. Though she recovered well, Ali did not return back to Marshall Paxton Hospital, and instead she joined Doctor Without Borders in a third world country. While she was caring for patients, a group of soldiers marched into her clinic and pointed a gun to her head. With a gun going off in the background, viewers had to decide for themselves if Ali’s character is still alive or dead.

As for Kenneth Ma and Natalie Tong (唐詩詠), they plan to remarry with Kelly Cheung (張曦雯) and Ali as her bridesmaids.

The cast of Big White Duel watched the ending with a celebratory dinner, in which Natalie started a video live on Big Big Channel to share the event. When viewers asked about Ali’s character, she responded, “That noise you heard, Ram Chiang (蔣志光) thought it was just thunder. It is supposed to be an open ending, so I don’t even know the answer.”

Ali explained, “I’m not sure if my character had died or not. But I did grab the gun and fired at the soldiers.” As to why the ending was edited in such a way, the cast remains unclear.

Many viewers were dissatisfied with the unreasonable open ending, especially since the series had held such promise to being the best drama aired year-to-date.