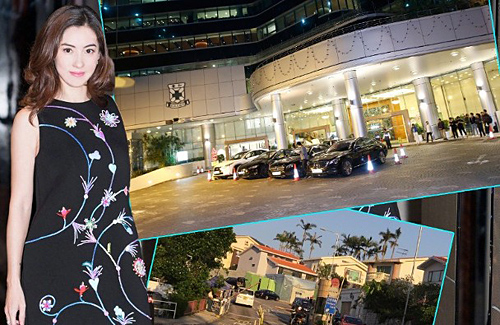 The shocking news of Cecilia Cheung (張柏芝) giving birth to a baby boy surfaced yesterday. The 38-year-old allegedly has been dating a 65-year-old Singaporean businessman and became pregnant at the start of the year. Giving birth on November 25 at the Hong Kong Sanatorium and Hospital, Cecilia has already secretly left the hospital.

Yesterday, Cecilia’s mother was spotted at the hospital, but she didn’t respond to questions about Cecilia’s new baby, only stating that she was there for a medical checkup. However, the hospital continued to be swamped by reporters eager to see if more of Cecilia’s friends and family may show up.

A large number of reporters also waited outside Cecilia’s residence in the Tai Po district, but the actress didn’t make an appearance.

Asked if Cecilia has already left the hospital, good friend Eugina Lau (劉美娟) said, “I don’t know!” Pinky Cheung (張文慈) replied, “Sorry, I don’t really know and can’t respond right now.” Both Eugina and Pinky were initially shocked to hear that Cecilia had given birth, but admitted they haven’t seen her for close to a year and weren’t in the loop.