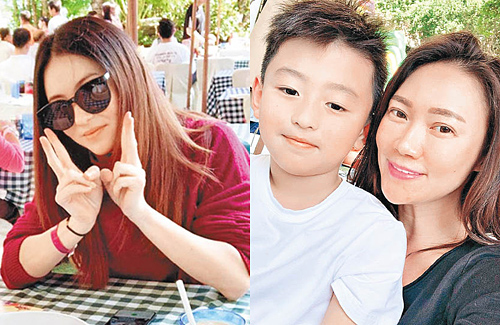 Just one week after allegedly giving birth on November 25 in Hong Kong, Cecilia Cheung (張栢芝) was spotted going outside and being in a great mood.

Since her marriage in 2006 with Nicholas Tse (謝霆鋒), Cecilia gave birth to two sons, Lucas Tse (謝振軒) and Quintus Tse (謝振南). However, after a nasty divorce in 2011, Cecilia’s love life appeared to have been non-existent, albeit the actress was never short of pursuers. It was not until this May, when Cecilia’s life became more secretive – besides being speculated to have been dating in secret, Cecilia also deleted all her social media posts. In November, it was said that Cecilia secretly gave birth to her third son – the father of the baby is apparently a 65-year-old Singaporean businessman.

Although it’s common for Chinese women to stay at home and rest for the first month after giving birth, Cecilia was seen going out with Quintus yesterday. With her face appearing fuller than usual, the actress was smiling while playing with Quintus at an event for her yacht club. Not minding that there was a huge crowd at the event, Cecilia laughed and had a good time. Bumping into a good friend and nutritionist – Bonnie, the two had lunch together with Quintus.

When reporters reached out to Bonnie for a phone interview, she was asked if she knew about Cecilia’s baby. Confused, Bonnie said, “No, it’s not true so I didn’t even bother asking her. [Did she have a baby bump or is her walk funny?] No such thing, she’s like usual – her arms and legs are very slim, it doesn’t even look like she just gave birth. Some people said that she has gained weight, but I don’t see any changes. [Have you heard about her new Singaporean boyfriend?] She usually puts her children first, having a boyfriend is not really her priority and I’ve never heard her talk about a boyfriend before.”

When asked why Cecilia deleted all her photos on social media, Bonnie simply said that a lot of artistes use their platforms for share tidbits of their life, but would often delete them if they find a lot of negativity surrounding a post.

After Bonnie and Cecilia had lunch at the yacht event, Bonnie uploaded a photo onto her own social media account, voicing her excitement to have bumped into her good friend. When the public questioned the date of the photo, believing that she intentionally uploaded an older picture, Bonnie said, “That’s easy – just look at photos from the yacht event and notice the bracelets they’re wearing. The bracelets were given out that day and it’s only once a year. There’s no lying – a lot of people saw Cecilia yesterday. Even though I didn’t see anyone else from the entertainment industry, a lot of people were present.”

3 comments to Cecilia Cheung Spotted Out After Giving Birth