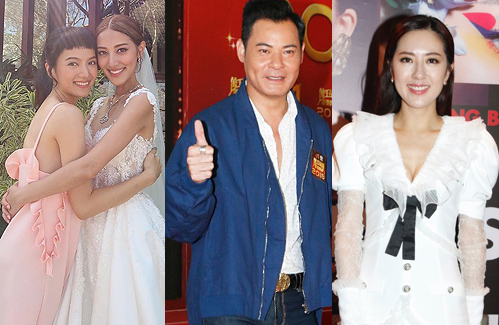 Yesterday, 49-year-old Kevin Cheng (鄭嘉穎) and 27-year-old Grace Chan (陳凱琳) announced on Instagram that they are expecting their first baby. The couple’s close friends already knew about the good news for some time and have been helping keep the secret hush before the public announcement.

Ben Wong (黃智賢) is looking forward to being the godfather of Kevin’s baby. Ben said, “I knew about [Grace’s] pregnancy a bit before everyone else. My wife and I were having dinner at Kevin’s house and they were very happy and shared the good news. I’ll be promoted to godfather.” Ben said he wouldn’t reveal the gender of the baby and let the parents make the announcement instead.

Revealing a humorous story that Kevin had told, Ben said, “When Kevin and Grace went for the ultrasound, Kevin saw the screen and said, ‘wow, it’s very big!’ The doctor said that’s the umbilical cord! When Kevin told the story that night, we laughed for a long time. I’ve known Kevin for many years and know that he always wanted to be a daddy.”

Kenneth Ma (馬國明) and Natalie Tong (唐詩詠), who grew close to Kevin after A Fistful of Stances <鐵馬尋橋>, also knew about the baby news for some time. Natalie said, “I’m very happy for them. It’s great that their wish came true so quickly—I know they really wanted to be parents. Looking forward to the baby’s arrival!”

Grace’s good friends, Anjaylia Chan (陳嘉寶) Winki Lai (賴慰玲) are happy for her. Winki, who became a mom in December of last year, said excitedly, “Seeing Grace and Kevin from their dating days to marriage and finally becoming [expectant parents], it’s been a lot of good news. I’m very happy for them. Hope they will continue to have more kids!”