By jayne on December 7, 2013 in Celebrity Weddings, NEWS 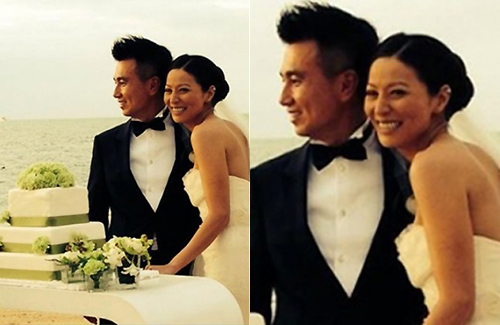 TVB actress, Joyce Tang (滕麗名), married her boyfriend of two years, Matthew Chu (朱建崑), on December 7. The couple’s destination wedding was held at the W Hotel in Ko Samui, Thailand. Surrounded by the beach and sea, Joyce and Matthew exchanged their vows in an intimate ceremony witnessed by 50 friends. Joyce wore two bridal dresses designed by Vera Wang, which were valued at $250,000 HKD.

Thirty-seven-year-old Joyce started dating 42-year-old Canon executive, Matthew Chu, in 2011. However, Matthew was reportedly torn between choosing his official girlfriend and Joyce. Although the relationship had a bumpy road, Joyce continued to be very attentive to Matthew and the couple was back together in April 2012. At the beginning of this year, Matthew proposed to Joyce. The couple decided to hold a destination wedding away from Hong Kong because Joyce wanted to keep the celebration simple. “In Hong Kong, the celebrations would have lasted for three days straight!” Joyce said that she does not want to be tired from the preparations and left the planning for Matthew to handle. They decided to have their wedding in Ko Samui because of Joyce’s love for water sports. Joyce said it is unlikely that the couple will hold another banquet in Hong Kong later, but will meet with family for a celebratory dinner.

On December 4, Joyce was spotted at the Hong Kong International Airport. She was surprised to see reporters at the airport and greeted them, but did not answer directly about why she was leaving Hong Kong. In a later text message, Joyce confirmed that she was getting married.

Today, Joyce uploaded a wedding photo on Facebook to share with her friends. The newlyweds looked vibrant as they cut their wedding cake on the beach. The couple loves children and Joyce will try to start a family soon. Note: This article was updated on December 9, 2013 at 12:16 p.m. to reflect additional information that emerged regarding Joyce Tang and Matthew Chu’s wedding.