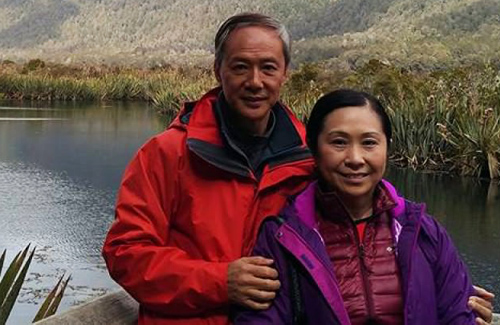 Although many may not know Chan Wing Chun (陳榮峻) by name, the green-leaf actor is easily recognizable by the young and old, having appeared in many TVB dramas through the years. At 62 years old, Chan Wing Chun is set to marry his fellow green-leaf actress and singing teacher, 57-year-old Helen Ng (吳香倫). After being together for more than two years, Chan Wing Chun felt it was time to get married. This will be Chan Wing Chun’s second marriage and Helen’s first.

Wife Died After 29 Years of Marriage

In 2010, Chan Wing Chun’s wife, Cheng On Lai (鄭安麗), unexpectedly passed away due to a stroke. Having been married for 29 years, Chan Wing Chun nearly broke down. At one point, he even contemplated suicide, but could not bring himself to leave his children. Instead, he chose to live his life day-by-day, believing that his time will come as fated. Four years after his wife passed, Chan Wing Chun got to know Helen on set of filming Gilded Chopsticks <食為奴> in 2014. They exchanged phone numbers and began spending time together regularly. Chan Wing Chun recalled, “During the process, we just went out shopping. I thought that since she agreed to come out and join me, then her feelings toward me must not be all that bad. Even after we got together, I did not directly confess [my feelings]. We just naturally began holding hands.”

Although their relationship seems to be one of practicality and progressed naturally, Chan Wing Chun shared that he indeed deliberately made efforts in courting Helen. “I knew that she teaches singing. In order to get close to her, I asked her to teach me how to sing!”

Although he is remarrying, Chan Wing Chun sentimentally admitted that his deceased wife will always be a part of him. “I think about her from time to time. After all, we have been together for many years, shared many experiences, and have sacrificed so much for our family. After my wife left, of course I was in grief. But I eventually began thinking that once my children are grown, they too will have their own families. I will be all alone then. I would want someone to spend time with and accompany me to watch a movie or something.”

Chan Wing Chun shared that his children are supportive of his new relationship. “They are very respectful of it. They know that I am alone and feel that having a companion is a good thing. Helen and I went to New Zealand previously and she met my daughter. It was nice.”

As a traditional Chinese man, Chan Wing Chun felt it was necessary to bestow an official title to Helen after the couple had been together for two years. On his thoughts about Helen, he said, “I think she is very filial. In order to care for her mother, she has never gotten married.”