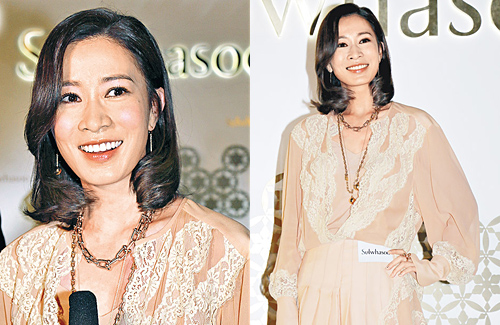 Charmaine Sheh (佘詩曼) is riding another popularity wave after Story of Yanxi Palace <延禧攻略> became a broadcast sensation. It was reported that the 43-year-old actress only accepted $2 million RMB for her role, but producer Yu Zheng (于正) quickly shot down the rumors and said Charmaine was one of the highest-paid actresses in the drama.

At a cosmetics event, Charmaine said that many people liked her villain role in Story of Yanxi Palace. Laughing over the salary rumors, Charmaine said. “The cast and crew had a great time working on this drama. Many new discussion topics emerged afterward; some are true and some are fake.” Asked if that meant that her reported salary was false, Charmaine said, “I’m going to quote from my character: ‘No matter how incredible something is, it’ll become true if someone believes it. So it’s unnecessary to explain too much. As long as I know the truth, that’s fine.”

Although Charmaine was discrete about her filming fee, producer Yu Zheng came to her defense and said that Charmaine actually received one of the biggest checks among the cast. Charmaine had filmed 74 days in the 70-episode Mainland drama.

Actress Wu Jingyan (吳謹言) was rumored to have been blacklisted by the Mainland broadcasting authority due to her arrogant behavior. But the claims proved to be false, as the publication has already issued an apology to Wu Jingyan. Accepting the apology, the 28-year-old actress thanked fans who were concerned about her.