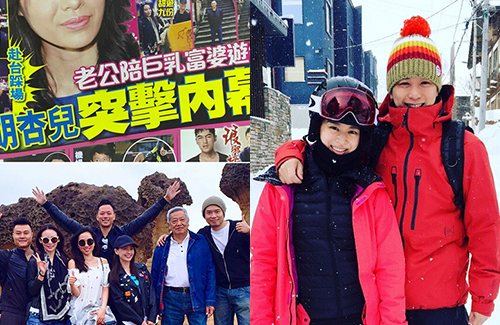 On Thursday, a Hong Kong tabloid magazine published an “exclusive” report claiming that Myolie Wu’s (胡杏兒) husband, Philip Lee (李乘德), had secretly traveled to Taiwan with an attractive female friend, suggesting cheating rumors. Myolie was also said to have traveled to Taiwan, and paid the pair a “a sudden visit.”

But Philip was very quick to hit back at the tabloid for their hurtful accusations.

“This magazine decides to cut and stick together pictures of us in the hope of selling an ‘exclusive’,” said Philip in a statement he posted on Instagram, his only public social media account, “[and] this time they base their story on a ‘sweet’ trip I enjoyed with my buddy in Taipei. [But] of course they don’t disclose that a whole bunch of my good Taipei friends were also part of the trip.”

Emphasizing that his friend in question is also married, Philip continued, “Such ‘reporting’ on two people who are not only great friends but also have partners is irresponsible and unprofessional. I am more upset for my friend who has been linked into this in a derogatory way. It is NOT fair to her and I have already apologized to her and her husband profusely.”

Philip said Myolie is also good friends with the woman and had been laughing at the report.

“Thank you to this member of the HK media for reminding me that with these stories you are not here to help society,” said Philip.

Nonetheless, the businessman added that the report did not affect his friendship with the woman and he will continue to stay strong so the media will not control his life.

Myolie reposted Philip’s statement on her own social media, adding, “Please believe in love. Stop with the conspiracy theories.”

In a later phone interview, Myolie expressed, “We are all good friends. She already has a husband so do not make stories up. I believe in my husband one hundred percent.”