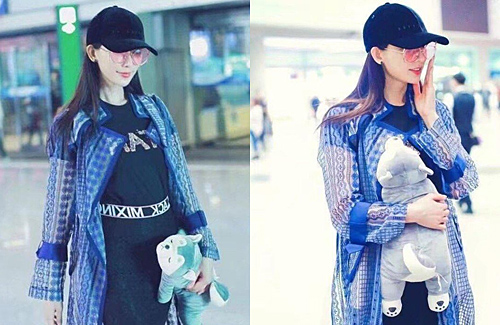 Chiling Lin (林志玲) announced her sudden marriage with Japanese band Exile’s Akira last month. It was speculated then that the reason behind her flash marriage was because of her ailing mother. However, the 44-year-old model may be expecting.

Chiling normally maintains a 23-inch waistline and fit figure. She was spotted at the airport with a slightly rounded stomach recently, and tried to hide it with a plush toy. Wearing a loose black dress and long coat, it had fueled netizens’ baby speculations.

Chiling has yet to respond to the matter, but Mainland Chinese reporters got in contact with her staff and they expressed that those are old photos from last November.

During the time of her marriage announcement, her brother Lin Chihong (林志鴻) had denied that Chiling got married because of a baby. Though, he emphasized that having a child is a must in one’s life course.