Christine Kuo Had to Pick Up Garbage on Wedding Night 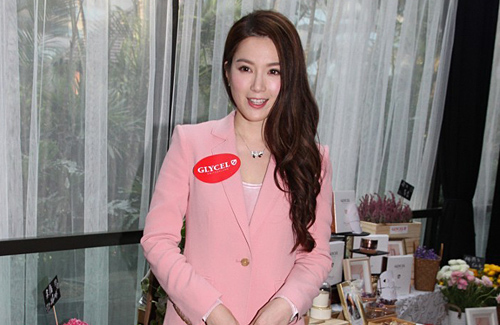 Christine Kuo (苟芸慧) recently attended her first promotional event as Mrs. Luk. The 35-year-old actress and her husband, William Luk (陸漢洋), held their fairy tale wedding on October 19. Instead of going on their honeymoon, Christine instead went back to work. “I will be filming soon and will also have two other events to attend. However, I will be in Hong Kong, so I can spend time with him.”

Recounting the events of her big day, Christine shared that instead of enjoying each other’s company on their wedding night, the couple instead went back to the wedding venue to clean up. “We went to pick up trash [after the wedding]. The wedding venue said we had leftover garbage that wasn’t cleaned up, so we went back to grab the leftover boxes and whatnot. The funny thing is that at the time, I had a sheet mask on and was wearing pajamas, but still had my hair up-do intact. We cleaned until 4:00 a.m.”

William, who is a known wealthy second generation, also helped clear out the space. “He’s used to being treated like a prince, so he seldom does these things. It was quite a romantic and sweet moment. After we cleaned, we were very tired and had to wake up early the next day too, so we went back to our room and just slept.”

One of the hardest things for newlyweds is getting used to referring to one another as husband and wife. Christine admitted that she is also having a hard time remembering. “I haven’t gotten used to saying it yet. I call him piggy. He calls me that too. We don’t get confused with having the same nickname for one another, because we know who we are calling out to.”

Reporters pestered Christine about the couple’s baby plans. She replied, “He’s not ready yet. He wants to enjoy married life with just the two of us. I’m fine with it.” William is a wealthy second generation, and it was reported that he gives her $10 million HKD for household expenses. Christine said, “What? How come I didn’t know about this? Let me check my bank first.” When asked whether William usually gives her money for household expenses, she said, “He usually gives me his card to buy things, but I earn my own money and invest. I’m an independent woman.”