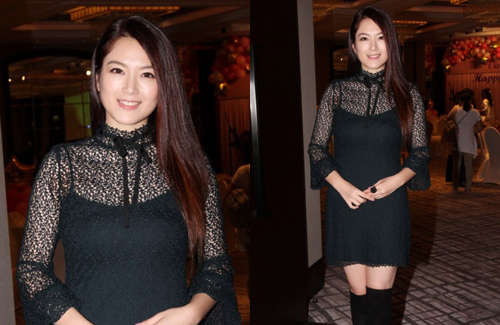 Despite being heavily promoted by TVB after her debut, Christine Kuo (苟芸慧) was not popular with the audience due to her raw acting skills and poor Chinese. Christine’s image further plummeted after reports claimed that she was the third party in Aaron Kwok (郭富城) and Lynn Hung’s (熊黛林) breakup. In 2013, Christine was diagnosed with hyperthyroidism. Her immense weight gain was heavily scrutinized by the public, causing her to take an indefinite hiatus from the entertainment industry to nurse her health.

Suffering from hyperthyroidism and depression, Christine was fortunate enough to have found the light at the end of the tunnel. Shifting her focus and energy to business ventures and self-improvement, Christine regained her confidence and successfully shed the extra weight. Standing alongside good friends Leanne Li (李亞男) and Grace Wong (王君馨) at an event recently, Christine appeared slim and confident. Donning a modest black dress with knee-high boots, Christine showcased her long legs and fit physique.

Christine smiled radiantly and shared her secret to successful weight loss. “I had the help of a slimming company. I have regained about 90 percent of my figure. There are still some improvements to be made.” With Christine’s mental and physical health back to its prime, she may be preparing for an imminent return to the television screen soon.