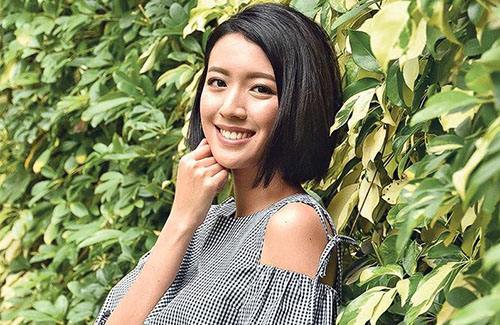 It has been a stressful three years for Sisley Choi (蔡思貝), who hasn’t gone a day without the burden of negative gossip. The 2013 Miss Hong Kong runner-up, who made her debut three years ago as an actress, has had both her public and private life judged—from the controversy behind her academic career, to the constant love rumors with her costars. Sisley knew she had to stay strong to keep herself sane, but all that negative gossip actually made Sisley feel more inferior.

Although it’s been only a mere three years since Sisley started acting, she’s had the opportunity to play a variety of different roles—a college student, a cyclist, a martial artist, a police officer. In her most recent drama My Dearly Sinful Mind <心理追兇Mind Hunter>, Sisley played a gentle and quiet social worker, a stark contrast from her earlier robust roles. Sisley has a gentle personality herself, much unlike the image she puts on in her acting career.

At one point in time, Sisley was rumored to be dating a different costar every month, significantly bringing down her public image. “I’ve had rumors with both Alan Wan (溫家偉) and Adrian Chau (周志文), and they’re both close friends of mine. We’re practically sisters. But I know time will tell. We’re still friends and hang out.”

At the mention of her rumored boyfriend Shing Mak (麥秋成), Sisley said, “I’ve never admitted to dating him, and I also won’t admit to breaking up with anybody. I don’t want to elaborate on my romantic life to the public. I only need my close friends to know. After all, I don’t consider dating to be a two-person thing. I will introduce my boyfriend to my friends and family.”

Sisley said she used to hide herself in a corner and cry when she first faced the reality of having to deal with negative press. “I felt like everything I did was wrong, and it really affected my performance. But now I know how to adjust it, and kick away the negativity.”

For years, the 26-year-old was criticized for her poor acting and being too loud in her roles. She has heard all of the constructive criticism and is working on improving herself. “I’m not getting as much complaints about me being too loud anymore, but I know I still have some lazy tones. I think it’s because I speak many languages, and that slurs my speech. I really need to work on that.”

The attacks Sisley faced during the first three years of her career made her feel inferior, but she’s going to build confidence from experience.

“I need to build more confidence, so I’ve been doing a lot more reading and exercising. I’ve been watching more movies to work out my acting,” she said. “That’s how I’m going to find my confidence again.”