“Death By Zero” is Katy Kung’s Most Unforgettable Drama 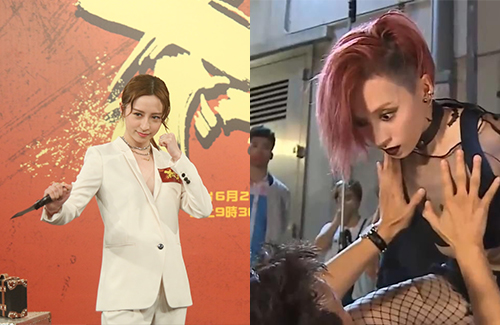 TVB action drama Death By Zero <殺手>, a series about assassins, will premiere next Monday, June 29. On Thursday, the cast attended a press conference held at TVB City in Tseung Kwan O to promote the drama.

One of the stand-out cast members on the show is Katy Kung (龔嘉欣), who plays the blood-thirsty Dark Angel, a professional assassin. For the role, Katy dyed her hair pink and shaved the side of her head. Her outfits are edgy and revealing, including bra tops and fishnet stockings. It was a very unforgettable role for Katy.

“It was hard for me to accept how I looked until after filming the show,” she said. “Every day, I would go into work hoping for a smooth filming. After everything was done for sure, I immediately added hair extensions, just to calm myself.”

Playing assassins of different factions, Katy and Wayne Lai (黎耀祥) shared many action sequences together. One scene included Wayne pressing his hands on to Katy’s chest. “It was an interesting feeling,” she said. “I have to admit, there was some awkwardness. We were both very sweaty, and I also wasn’t wearing much. We probably had over 30 outtakes of that scene.”

Despite the awkwardness, both Katy and Wayne had to play out like it was nothing. “If we show our awkwardness, the people around us would feel awkward,” said Katy.