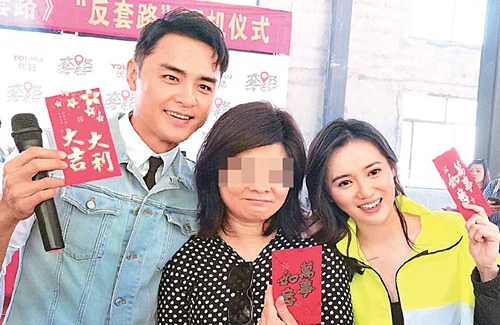 Hong Kong director Lam Suk Jing (林淑貞) revealed that she was nearly raped inside a Mainland Chinese hotel room last week. The director of web-series, Route <套路>, revealed the emotional turmoil that she has been through since then, as well as why she agreed to a settlement over the case.

On the night of the incident, Lam Suk Jing was sleeping on the 18th floor when she suddenly felt the weight of another person on top her. She immediately fought back – forcefully shoving him out of her room. She contacted hotel employees and alerted the police.

As it turns out, the man was a pilot for Hainan Airlines who climbed over to her room’s balcony from the room next door. Although contacting the police, Lam Suk Jing said they did not record or takes notes when she was giving her statement. The director also revealed that the police urged her to reach for a settlement instead.

On Hainan Airline’s side, Lam Suk Jing said the suspect’s boss also tried to talk her into settling. The pilot allegedly was drunk and made a mistake. As she is not familiar with the local laws, she said she would take a few days to decide.

Going back to the police station again, Lam Suk Jing told the police she wants to have the case remain open before making a final decision on whether or not to press charges. This time, the police did record her statement but warned her that she may be counter-sued for assault, as she had forcefully hit the man. Unsure of what she can do, Lam Suk Jing left the production Route set and returned to Hong Kong, focusing on the case and her mental health.

The news spread quickly and caused an uproar among the Route cast and crew. After reading Lam Suk Jing’s statement over the case, netizens angrily questioned the Mainland Chinese police’s actions. They wondered why this case was flagged as public defamation, rather than attempted rape.

Route actor Vanness Wu (吳建豪) expressed his support for the director and exclaimed, “No woman should have to endure something like this!”

After both Hainan Airlines and the police got wind of the public’s questioning, the two parties released separate statements, indicating that they will do their best to assist with the incident. Hainan Airlines said they will fully cooperate with the police and have already suspended the pilot, stressing that they will not tolerate those who disobey the law. Holding the pilot in custody, the police said they will do an in-depth investigation as well as conduct an internal search on the team that handled Lam Suk Jing’s case initially.

Thanking the Federation of Hong Kong Filmmakers, Hong Kong Film Director’s Guild, actor Tin Kai Man (田啟文), and directors Andrew Lau (劉偉強) and Stanley Kwan (關錦鵬) for their help and support since the assault, Lam Suk Jing sighed, “Like the lawyers have said, this is only the beginning. There’s still a long road ahead of us.”