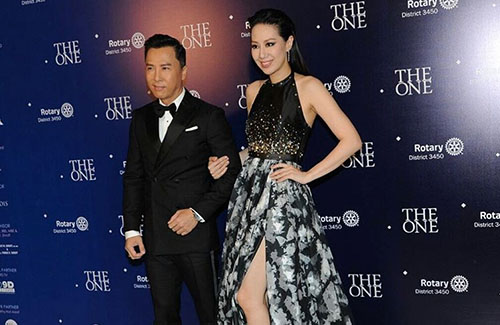 Ip Man 4 <葉問4> is in the making, as confirmed by Donnie Yen (甄子丹) at a recent event he attended in Hong Kong with his wife, Cissy Wang (汪詩詩), on Tuesday night.

According to the action star, Ip Man 4 is currently in its script-writing stage, and is projected to start production next March.

“Director Wilson Yip (葉偉信) is getting the script together right now,” said Donnie. “Production should start in March of next year, because that’s when we all have time in our schedules. I’ve saved that slot for Ip Man 4 already.”

Asking Donnie if he would act as a consultant for the film, giving the writing team some advice, he said, “I don’t think I’ll be giving any advice yet. After Wilson finishes the script, he’ll naturally come to me for suggestions. We often communicate about the script on-site anyways.”

A few days ago, Donnie and his family were spotted attending a concert by the K-Pop boy band BTS in Hong Kong, attracting some attention. His wife Cissy said, “They’re a trending group right now, and our kids are fans of them. Since Donnie didn’t have to work that day, he decided to come along to help take care of the kids.”