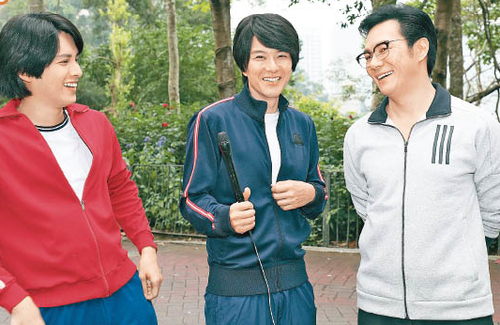 Yesterday, Eddie Cheung (張兆輝), Edwin Siu (蕭正楠), and Matthew Ho (何廣沛) were in the middle of the mountains to shoot a running scene for TVB drama Golden Crime <黃金有罪>. Before the cameras began rolling, Matthew’s hands were covered in mosquito bites, and Edwin added salt to the wound by making fun of his recent news with Rebecca Zhu (朱晨麗).

Earlier, Matthew was seen on a date with Rebecca and 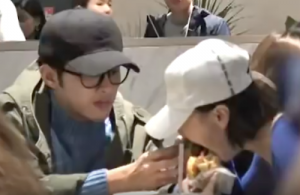 even got caught on camera feeding her a hamburger. Although this was the second time he was filmed feeding her, Matthew explained, “She wanted to try my burger, so I fed it to her since she didn’t have any free hands.”

Edwin quickly jumped in and said, “He’s very caring. He really likes to feed people – I saw the video.”

However, Eddie came to Matthew’s aid and praised the young actor’s thoughtfulness. “It’s very rare to be so considerate; he’s a good boy!”

Hearing this, Edwin commented that Matthew would’ve been dumped already if he wasn’t a good boy, making the other party very helpless. He continued to tease Matthew when reporters asked if he and Priscilla Wong (黃翠如) have more intimate pictures to share on social media following the picture that Priscilla posted on New Year’s Day. Edwin said, “No! You expect us to feed each other hamburgers or something?”

He also added the picture was taken a long time ago when he would often take pictures with Priscilla to commemorate special days before they announced their relationship. “Now, all of them are coming out!” Edwin said.

Busy filming for the drama, Eddie revealed he did not have time to help with the funeral for late director Ringo Lam (林嶺東). However, he will attend it once he has time. “He is a really good friend, a really good senior, and a great director,” Eddie expressed. “My wife reached out to his wife.”