Steven Ma Chun Wai, Linda Chung Ka Yan, Sunny Chan Kam Hung, Katy Kung Ka Yan and Fala Chen attended the praying ceremony for “Legend of Pu Songling” 《蒲松齡》. In the series, Fala will dress up as a man. Fala appeared extremely “handsome” in her costume. Fala laughed, “My character is a fox spirit. Following my grandfather’s instructions, I descend upon Earth dressed as a man and can not reveal that I am female.”

Did Fala find her appearance to be “handsome?” Fala said, “It’s not bad; this is my first time dressing as a man before the camera. The scenes may require more masculine mannerisms, such as sitting with my legs apart, which I find comfortable. Sometimes I will forget to lower the pitch of my voice.”

What were the special precautions that Fala took to prepare for the role? “I have to wear a sports bra [to flatten my chest]. If I arch my back, then my figure will show.” Linda Chung teased Fala about her curvy figure.

While dressed as a man, Fala attracts the attention of Katy Kung’s character. Katy falls in love with Fala’s male persona and even vows to commit suicide, forcing Fala to reveal her true gender.

Aside from “Legend of Pu Songling,” Fala is also currently filming “The Nutritional Housewife” 《有營煮婦》. This has decreased her availability in appearing in sponsored events, reducing her income year-to-date. However, Fala will continue to concentrate on filming TVB series for the time being. If Fala were offered to appear in a swimsuit show, would she reduce her fees? As TVB is concerned about increasing artist and company revenue, it would be only proper that the fees will only increase.

“Legend of Pu Songling” is the fourth time in which Linda Chung and Steven Ma have collaborated together. In the series, Linda will have a love triangle with Steven and Sunny Chan. Recently, the media has pointed out the physical resemblance between Linda and Wu Zun. Linda watched the 28th Annual Hong Kong Film Awards since Wu Zun was a guest presenter. Linda hopes to have the ability to act as Wu Zun’s sister sometime. In addition, Linda was happy for Nick Cheung Ka Fai, who won this year’s Best Actor Award.

Jayne: Fala Chen looks great as a man or woman! It’s the strong cheekbones and twinkly. 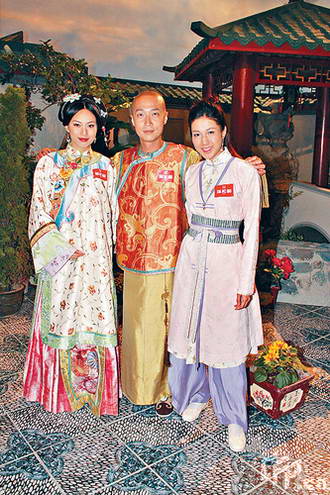