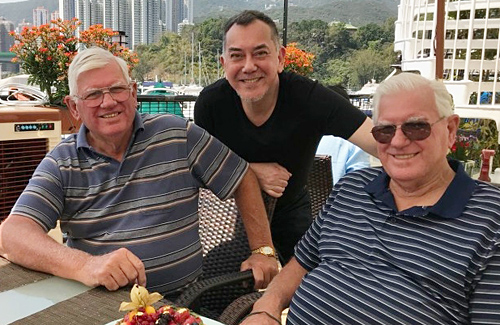 What started out as a Facebook post to look for his father has led 56-year-old Anthony Wong (黃秋生) to meet two half brothers that he never knew about. On March 20, 74-year-old twins, John William and David Frederick Perry, traveled from Australia to Hong Kong to meet with Anthony. The three men were emotional as they embraced each other and felt an immediate connection as family.

Through his half brothers, Anthony learned that his father, Frederick William Perry, had already died in 1988. The Perry brothers said that their father never told them about Anthony and his mother.

Anthony’s father walked out on his life when he was only four years old. Struggling with his self-identity while growing up, Anthony was often bullied because of his mixed looks. His mother, Wong Chun Yi (黃尊儀) worked as a maid in order to make ends meet. She woke up at 3 a.m. to go to work and did not return home until 12 a.m., and suffered from leg pains due to the long working hours. Appreciating his mother’s sacrifices, Anthony has always been a filial son. 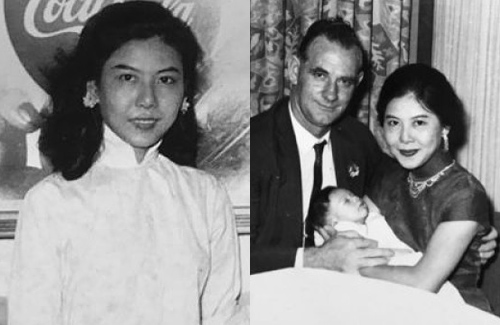 Anthony knew little about his father, except that he was a former British government official. In 1997, Anthony went to England with his mother to look for clues about his paternal family, but without success.

Last year while drunk and possessing little hope, Anthony posted on Facebook that he was looking for his father. After seeing his Facebook post, BBC became very interested in Anthony’s search and interviewed him this February. A Facebook page was subsequently set up to help with the search; within two weeks, clues started pouring in about Anthony’s paternal family.

At the same time, John and David’s cousin in England alerted them of the BBC story. When they watched Anthony’s interview and saw a photo of their father, John and David were incredulous. Their mother had died in 1972 and they believe she did not know about Anthony either. After speaking on the phone with Anthony, John and David decided they must go to Hong Kong.

John and David grew up in Hong Kong and did not go back to England until they were 17 years old. In the last few decades, they have lived in Melbourne. Although they speak some Cantonese, they have not watched Anthony’s movies before. But the brothers quickly discovered common interests. Anthony said, “I played music and it turns out my brother did, too. I trained in boxing and it turns out my father had been a middleweight champion.”

Although Anthony brought his mother to meet with John and David, he did not explain they were his half brothers. Suffering from a stroke and dementia in recent years, Anthony’s mother’s memories have been fragmented. Anthony said, “When she saw my half brothers, she had a strong reaction. She probably knew who they are. She wanted to stand up and talk to them, but I saw her emotional state and quickly pulled my brothers away.”

After a four-day stay in Hong Kong, in which Anthony took John and David out for meals, the Perry brothers have gone home. Asked whether he will bring his mother to Australia, Anthony said, “No, she can’t go on the airplane. I’ll go by myself. There are over 20 people [in my father’s family], so we can gather for a barbecue during Christmas.”

Finally feeling closure in the search for his family, Anthony is still amazed by the meetup.  “It was just incredible,” Anthony said. “After all these years and suddenly it all happened in two weeks!”