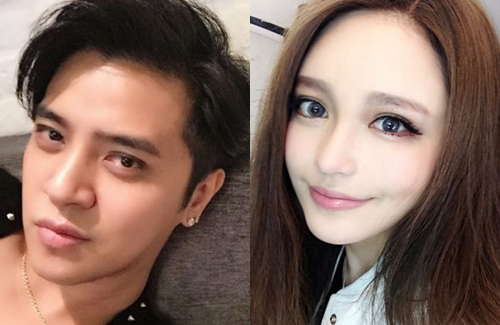 Taiwanese pop star Show Luo (羅志祥) was recently spotted spending two nights with mainland Chinese Internet celebrity, Grace Chow (周揚青), at a hotel in Shanghai. He later posted an ambiguous message on his Sina Weibo, seemingly confirming his relationship with Grace. However, many of Show’s fans expressed discontentment with his new beau.

On June 16, Grace was seen arriving in Shanghai, where Show is currently filming the variety show, Go Fighting! <極限挑戰>. She waited in one area for approximately ten minutes, during which she busied herself by scrolling through her cell phone and smoking a cigarette.

After receiving a message on her phone, she headed to a hotel – the same hotel that Show went to after finishing his work for the day. The two were originally in separate rooms, but Show reportedly rested in his room for only a little while before entering hers and spending the night there. He spent the next night at her hotel room as well.

The next day, Show posted a message on Weibo, saying, “Yes… thank you, everyone! Teachers, it’s been hard on you too! But I will still work hard and do my job well! Please remember every Sunday evening~ be on time to watch Go Fighting!”

Although the subject of his Weibo message is not clear, many netizens suspect that he is indeed confirming that he and Grace are in a relationship.

Born in Beijing in 1988, Grace is nine years younger than Show, who will turn 36 this year. This is not the first time they have been mired in romantic reports. As early as 2011, sharp-eyed netizens had already spotted the two of them engaging in flirtatious behavior. At the time, however, Show’s manager angrily rebuked fans for making up rumors.

Last year, the rumors crept up again after Show and Grace posted Instagram photos featuring similar clothing, necklaces, and poses. Neither one confirmed their relationship, instead stating that they were simply friends.

Nevertheless, Show and Grace were later photographed vacationing together in Japan. Also present was Show’s mother, suggesting that he had already introduced Grace to her. Although Grace is very popular online – she is known as the “little Angelababy” and has more than 90,000 followers on Weibo – the majority of Show’s fans have expressed disappointment at their idol’s new girlfriend.

Many of them are turned off by her smoking habit, while others suspect her of having undergone plastic surgery. Based on old pictures, Grace’s previous figure was plumper, her face was rounder, and her features were more ordinary.

Some fans are also disgusted by Grace’s fondness of showing off her brand-name apparel and expensive cosmetic products on Weibo. One netizen even posted that Grace’s father is the executive of a large-scale state enterprise, while Grace herself dropped out of school and was later sent to England to finish her studies. However, the truth of this statement has yet to be verified.

“I still don’t understand why you would find a plastic surgery monster who loves smoking and worships money,” one fan angrily wrote on Show’s Weibo. Another lamented, “I really cannot give you my heartfelt blessings. I just hope that you will do well and no longer injure the hearts of your fans.”

Other fans took to the Weibo account of Show’s mother, asking her if she was satisfied with her son’s girlfriend. “How can you give your beloved son over to such a woman?” they asked. “One look at her, and you can tell she’s a spendthrift! How come we’ve followed Show for this long, only to wait for trash like this?”