“Flying Tiger 2” Flies to Number One in China 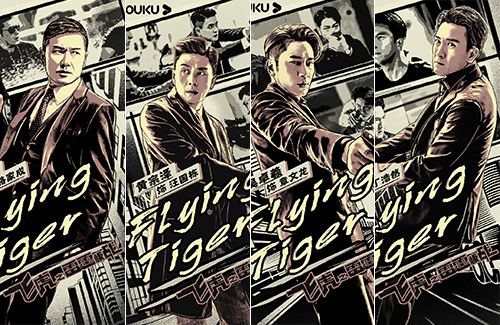 The Shaw Brother web series Flying Tiger 2 <飛虎之雷霆極戰> has just set a record for being the first Hong Kong drama to reach number one in hot searches across all streaming platforms, with the most weekly engagements in mainland China.

“Hong Kong dramas usually have only 30 episodes,” said Flying Tiger 2 producer Virginia Lok (樂易玲). “We have never had a drama that has topped searches in mainland China.”

There are many reasons that could have contributed to Flying Tiger 2’s popularity. Hong Kong film and television that center on police or triads have always been very popular in China. TVB series like 1995’s Detective Investigation Files <刑事偵緝檔案>, 1998’s Armed Reaction <陀槍師姐>, 2008’s E.U. <學警狙擊>, 2011’s E.U. spin-off Lives of Omission <潛行狙擊>, 2012’s Tiger Cubs <飛虎>, and 2014’s Line Walker <使徒行者> have all garnered extremely large followings in the mainland. Critics say that it is because locally produced police series are not as developed, daring, or entertaining as Hong Kong cop shows.

Flying Tiger 2 also reunites popular actors Bosco Wong, Ron Ng, and Kenneth Ma, as their last drama together was Triumph in the Skies <衝上雲霄> 16 years ago.

In addition, with the Anti-Extradition Law Amendment Bill Movement currently ongoing in Hong Kong, many Chinese netizens have a growing interest in Hong Kong politics. Flying Tiger 2, a show that glorifies police valor, may be too sensitive to air in Hong Kong at this time, but in China, it may be exactly something they want to see.