Frankie Lam and Jessica Hsuan Roast Each Other On Stage 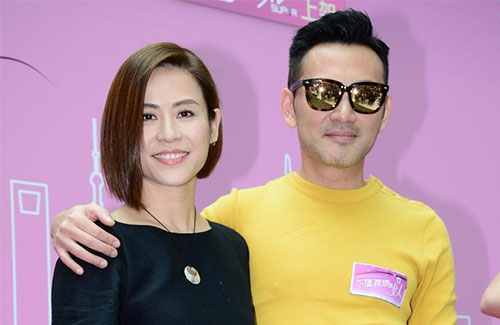 The event became a hilarious trash talk battle between Frankie and Jessica. Jessica called her leading man a cheapskate who doesn’t have a habit of treating people. In a game segment where Jessica tied Frankie up in a chain, the actor roasted Jessica with a comeback of his own: “Hey Jessica Hsuan, there’s no point of tying a man’s body if you can’t even tie his heart! I’m talking about all ethnicities!”

Frankie’s words seemed to be implying that Jessica could be in a relationship with a foreigner. In a later interview, Frankie clarified that he actually has no idea what’s going on in Jessica’s private life, saying, “When I was younger and watched her interviews, she sounded like she’s very broad in her selections. She’s not tied down to any country.”

“Coincidentally I have two foreign friends,” Jessica explained. Asking if she was in a relationship, she said, “I’m not. Stop listening to him! You definitely won’t be seeing him at our next promotional event!”

Reporters then turned to Frankie for more questions, who said, “I actually have nothing to reveal. I don’t want to die!”

Although Frankie and Jessica play a couple in the show, viewers won’t be seeing them kiss onscreen any time soon. “We actually don’t have any,” said Frankie. “But I do have some kissing scenes with Samantha Ko (高海寧) and Lena Li (李天縱).

Meanwhile Stephanie Ho (何雁詩), who was at the event to perform the drama’s theme song “I Don’t Know How to Act Cute” <我不會撒嬌>, has been going through some negative press due to her revealed relationship with Fred Cheng (鄭俊弘). Stephanie admitted that she’s been feeling pretty stressful: “It’s like all the energy’s been drained out of me, but I feel that I’ll become stronger when this is all over.”