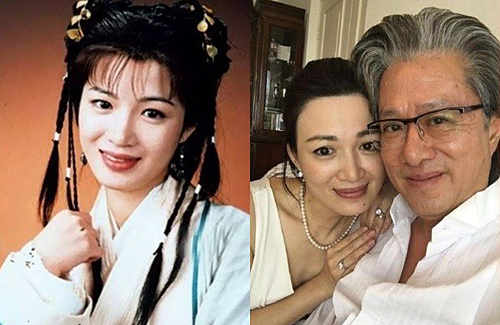 Cherie Chan‘s (陳少霞) story is a modern version of Cinderella. After her ex-husband died, the former TVB actress was left with two girls to support. Falling onto hard times, Cherie even lived in public housing and could only go to church to pray for help. There, she met and fell in love with 61-year-old millionaire, Richard Lee (李文輝). The couple married in 2016 and are now expecting a baby together.

Recognized for her role as Yue Lingshan in the 1996 TVB adaptation of The Smiling, Proud Wanderer <笑傲江湖>, Cherie married an Australian-Chinese businessman in 2000 and retired from the Hong Kong entertainment industry. The pair later divorced and her ex-husband died, leaving Cherie without means to financially support their two daughters. Cherie briefly filmed for ATV, but had to stop working when she was diagnosed with hyperthyroidism and her oldest daughter had type 1 diabetes.

Cherie didn’t lose faith and believed that the tough times would pass. At church, she recovered from her grief and even met her current husband, Richard Lee. After becoming a millionaire’s wife, she started taking better care of her health in hopes of having a son for her husband.

In a previous interview, the 42-year-old former actress said, “If I were pregnant, I would be really grateful!” The couple was devastated when Cherie had a miscarriage last year, but fortunately she got pregnant again this year.

In a recent Ferrari car event, the couple appeared hand-in-hand. Cherie wore a purple dress, which made her body look fuller, and displayed her pregnancy glow. Due to her swollen feet, she had to lean on her husband the entire time. The couple received a lot of happy wishes in hopes that the pregnancy will go smoothly as Cherie is considered high risk at 42 years old.

Cherie’s due date is summer 2019. Her pregnancy announcement follows many happy news this year, in which many celebrities such as Leanne Li (李亞男), Yan Ng (吳日言), and Vivi Lee (李美慧) became new mothers recently. Eliza Sam (岑麗香), Grace Chan (陳凱琳), and Phoebe Sin (單文柔) are also expecting and will be due next year.

7 comments to From Rags to Riches: Cherie Chan’s Cinderella Story