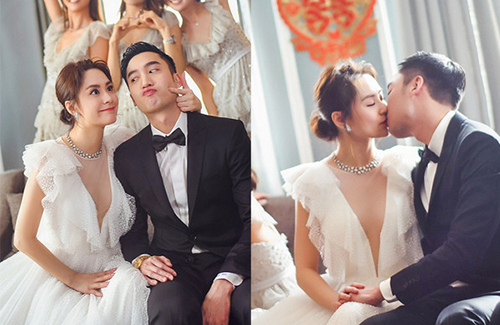 At the production wrap event for her new film Missing <失蹤>, Gillian Chung (鍾欣潼) had a change of style and openly talked about her relationship with her husband Michael Lai (賴弘國). The couple held their wedding in Los Angeles last May, and will be officially registering for marriage on December 18, 2018.

Praising Michael to be a caring husband, Gillian talked about a “supernatural” incident she experienced while she was in Wuhan for a Twins concert earlier this year. It was a day before the concert, and Gillian returned to her hotel room feeling exhausted. Halfway into the night, Gillian woke up from her sleep, but was paralyzed, unable to speak or move.

After recovering from her paralysis, she quickly called Michael for help, but Wuhan was in a blizzard at the time—experiencing its highest snowfall in 8 years—so many flights were canceled. Michael, who was also in China at the time, originally had no way to get to Gillian. However, after receiving Gillian’s call, Michael immediately found a way to reach her.

“I was touched,” said Gillian. “But obviously, he wouldn’t be able to save me from that.” The Twins singer said Michael is a deep sleeper. “He wouldn’t wake up even if I kicked him.”

36 comments to Gillian Chung Talks About Her “Supernatural” Experience