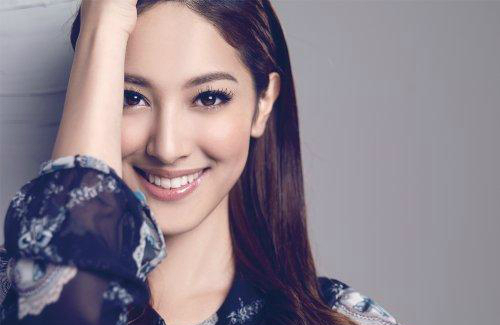 Kevin Cheng (鄭嘉穎) and Grace Chan (陳凱琳) are not letting their 21-year age difference block their way to love and happiness. The two started secretly dating after filming Blue Veins <殭>, and their relationship has since been flourishing. The 24-year-old Miss Hong Kong winner fell for Kevin’s patience and charisma as he constantly provided her with acting tips.

Grace happily gushed, “I really like his straightforward personality and his ability to form quick judgments. For example, should I get ice cream or a popsicle stick? He’s great at helping me make decisions! I really need someone like that, since I tend to be indecisive. He’s also a very caring man, and would slowly teach me how to act out certain scenes. When I’m afraid that my poor acting would affect others, he would comfort me and tell me that no one would blame me.”

In terms of their large age difference, in which the media refers to as a “parent-child relationship”, Grace expressed, “I don’t think there’s any distance between us. One of my psychology professors once told us that opposites attract, but I didn’t believe him at the time. Now, I finally realized that it’s true. When someone tells me something I don’t know about, my curiosity increases. Kevin has a lot more experience, and he knows a lot about things I don’t. Each day, it adds a tinge of freshness to our relationship.”

When it comes to love, Grace is definitely not fooling around or only devoted to a short-term relationship. She believes it is important that she is able to envision a future with her boyfriend. “It should be long-term, because why else would I want to date? Relationships shouldn’t be toyed with. I saw my friends argue and break up with their partners due to tiny matters, and I wonder why they can’t just try to understand each other and reconcile.”

Grace added that jealousy has powerful negative effects in a relationship, and she has witnessed couples around her break up due to such reasons. Therefore, she believes it is extremely important to have faith in Kevin. Grace expressed, “I see that he is extremely professional towards his career. So what if he chats with other girls? We both have friends of opposite genders. I can also better understand his personality by observing his interactions with other people. I know he is not the playboy type, and I definitely trust him!”

14 comments to Grace Chan Envisions a Future With Kevin Cheng