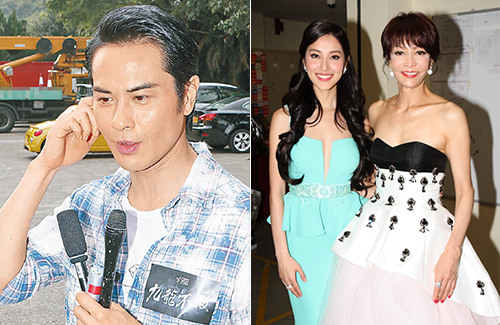 At the TVB Anniversary Gala held on Saturday, event MC Grace Chan (陳凱琳) had people shaking their heads with tears and laughter when she uttered a wrong Chinese idiom to the camera, causing veteran host Carol Cheng (鄭裕玲) to immediately clarify the mistake after commercial break.

In an MC segment where Grace was to express her thoughts on the hard work by TVB artists, the Canadian-raised actress erroneously used the four-character idiom “smashed into pieces” (粉身碎骨; fan san seoi gwat) instead of “dashing ahead regardless of safety” (奮不顧身; fan bat gu san). Carol immediately clarified Grace’s actual meaning after commercial break.

Her boyfriend Kevin Cheng (鄭嘉穎), who showed up at a camera commencement ceremony for the new Fruit Chan (陳果) film Made in Kowloon <九龍不敗>, defended Grace and said, “She’s never really studied Chinese before, so she always messes up her idioms.” (What language do you guys communicate in?) “Sometimes Cantonese, sometimes English. Mandarin too. So three languages.”

Kevin said it is not uncommon for Grace to mix up her idioms, as she often commits the same mistakes when she’s shooting dramas. “This isn’t her first time. When she was working with my friend Ben Wong (黃智賢) in a drama, she always got her idioms mixed up in her dialogue. But because she said them so naturally and fluently, it took them a while to realize it.”

The 47-year-old found Grace’s mistakes endearing, adding that he would make sure to give her more advice “when [he goes] home.” He then added with a laugh, “She wanted to say ‘fan bat gu san,’ right? Not bad! It kind of makes sense. Both have the word ‘fan’! We get what she’s trying to say. Both can be interpreted to mean hard working.”

After interviewing Kevin, the reporters phoned Grace, who said, “[Kevin’s] always been very supportive and encouraging. When I shot Wulin Revial <翻生武林> with John Chiang (姜大衛) and Ben Wong, they always joked about how I spoke fluent gibberish.”