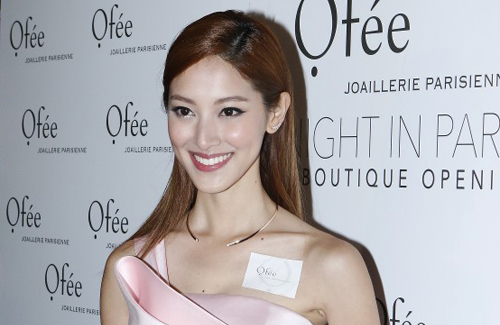 At a recent promotional event, Grace Chan (陳凱琳) was gifted a pair of earrings by the sponsors. She revealed that she appreciated jewelry with simple designs. On whether she had received a ring from boyfriend, Kevin Cheng (鄭嘉穎), Grace hinted that she may indeed have done so.

The couple selected the style together to make sure that Grace would like it. “It’s great to be surprised, but if we pick it out together, then I’ll definitely like the style.”

When prompted multiple times if she had received a ring from Kevin, Grace hinted, “I’m not saying I have never received it before.” She added, “Rings can be for many different occasions and are not necessarily always for marriage…. I don’t need to get married to receive a ring.”

As for Valentine’s Day plans, Grace said that she had yet to prepare a gift, and they  may have an early celebration as Kevin may not be in Hong Kong at the time. Grace will visit Kevin’s family for Lunar New Year and prepare gifts for them.

On whether she knows how to cook, Grace said, “I wish to learn how to steam carrot cake, as the process of making it will require a lot of love, and I can customize it according to the ingredients I like. I will probably be learning how to make it together with a friend this year.” Would Kevin and his mother have the opportunity to try it? Grace said, “If it succeeds, yes. But I will be the guinea pig and try it first. If it’s not nice, I will not share it.”

27 comments to Grace Chan Received a Ring from Kevin Cheng