Grace Chan Shares Update on Life with a Newborn 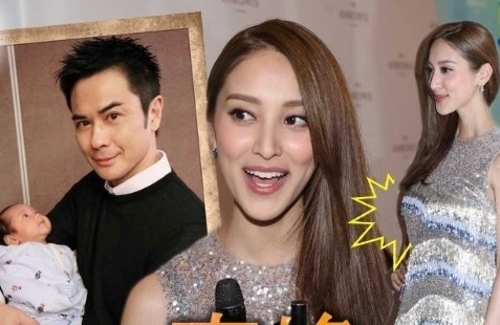 Grace Chan (陳凱琳) attended an event for eyewear brand Khromis yesterday and flaunted her slim figure. It was apparent the 27-year-old actress lost all her baby weight in less than two months after giving birth to her son Rafael Cheng. In fact, all eyes were on the star’s fuller bust, to which she attributed to breastfeeding. However, she hopes everyone will place their attention elsewhere and expressed the joys of being a first time parent.

“In the future, my figure will change again after I stop breastfeeding. I don’t want to have to address it then,” Grace said. “The most important thing is that my baby is fed well. His appetite is very good and he always looks so satisfied after eating. For that, I feel very grateful.”

She disclosed her husband Kevin Cheng (鄭嘉穎) is on the same page as her when it comes to another baby. They both have the desire for a second child but only after Rafael turns one. “We have a lot to learn especially with our first baby. There is so much to learn every day and it seems like we will never finish learning everything. Sometimes we make mistakes, but we learn from it. For example, my baby has erythema toxicum, which is very common, but my postpartum helper was the one who taught me to wash him with honeysuckle as a remedy,” Grace shared.

Since the new mother spends a lot of time caring for Rafael, reporters asked her if Kevin is jealous. She exclaimed she should be the one who’s jealous as Kevin dotes on Rafael a lot.

On top of that, she shared a funny story in which Rafael “poured tea” for Kevin. “At the time, I was standing right in front of him changing his diaper while my husband was standing on the side. Rafael took a piss and aimed it horizontally so it hit my husband,” Grace laughed.

As Rafael is still young, Grace revealed she is taking a break from filming dramas. Having already gradually resumed work, she is mainly focusing on variety shows for the time being. “I want to spend more time taking care of my baby. He is growing up every day so I don’t want to miss any challenges, so I will work on easier jobs for now,” she expressed.