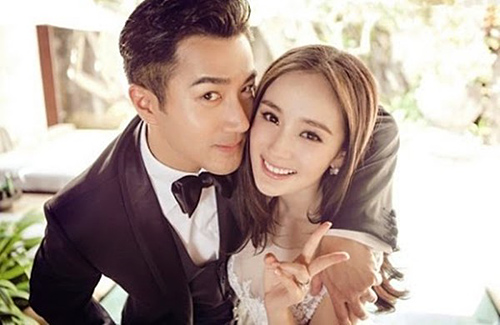 Every year at midnight on Hawick Lau‘s (劉愷威) birthday, Yang Mi (楊冪) would post a birthday greeting for her husband on her social media platform. But on Hawick’s 44th birthday this year, Yang Mi’s post did not appear. In the past two years, there has been a lot of buzz regarding the couple’s marriage. Could the divorce rumors be true?

In 2017 for Hawick’s birthday, Yang Mi had posted, “Little Sticky Rice’s dad, Happy Birthday!” However, within these two years, the busyness of the two had lead fans to believe that there might be marital problems. The couple has not appeared together in any events aside from their daughter’s birthday celebrations, which lead to speculation of a divorce.

Though Yang Mi has a busy schedule from filming to attending charity events, fans started questioning why she doesn’t even have time to post a quick birthday greeting. However, she did appear at the airport in full makeup and fans assumed she was flying back to Hong Kong for Hawick’s birthday. But instead, she was only attending a film festival.

Aside from pictures of cats and sunsets, Yang Mi has not posted on her social media platform, in which Hawick responded, “We will all be going on vacation as a family; please do not make up stories!”