How Donnie Yen Landed the Role of Ip Man 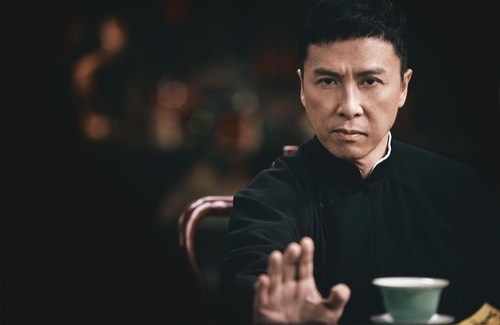 Breaking out with his iconic character Ip Man in 2008, actor Donnie Yen (甄子丹) successfully established himself as one of the best and most well-known martial arts superstars in the recent decade. Having portrayed the character so well, his performance in Ip Man <葉問> has left a deep impression amongst dedicated Hong Kong martial arts fanatics and casual moviegoers as well. However, perhaps unbeknownst to many, the 44-year-old did not achieve immediate success easily.

In fact, Donnie was a late bloomer in the industry, and only landed the role of Ip Man after impressing producers Raymond Wong (黃百鳴) and Tsui Hark (徐克) with his hard work in their film, Seven Swords <七劍>.

In 2004, Raymond and Hark sought to test the waters of the Mainland market by producing Seven Swords, but they ran into complications early on. South Korean star Hyun Bin was originally cast, but he suddenly backed out, and they urgently replaced him with Donnie.

At the time, they were impressed with Donnie’s determination and efforts during filming. Unlike the other actors who often left the set to seek refuge from the freezing temperatures on Tian Shan, Donnie was the only one who stayed on set. Moved by Donnie’s dedication, Hark added some scenes for Donnie to show off his acting. Raymond praised, “This person is called Donnie Yen. He waited and filmed for three months straight without any complaints.”

Seven Swords raked in 80 million HKD and garnered excellent results in the Hong Kong box office. Driven by such achievement, Raymond desired to attract more Mainland viewers through more action films. Donnie was the actor who came to his mind, so Raymond offered Donnie a three-year contract to produce one film per year. The actor accepted, but Wing Chun was the only martial arts style he did not know. It took him nine months to master the craft to the point where other Wing Chun experts acknowledged his skills.

With just one character, Donnie propelled into stardom and achieved 100 million HKD in sales in the Mainland market. The number doubled and tripled with the later sequels, including the most recent and final film, Ip Man 4: The Finale <葉問4: 完結篇>. Donnie reportedly earned 100 million HKD from this last installment.

“Ip Man 4: The Finale” Ends the Decade with Underwhelming Reviews