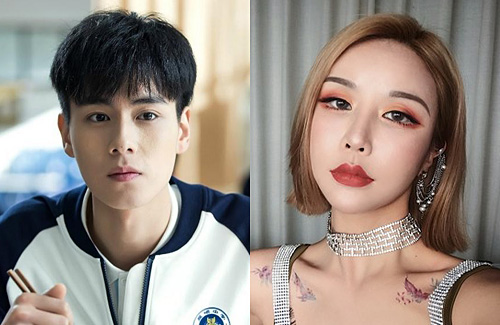 Mainland Chinese actor Hu Yitian (胡一天) was caught in a sex scandal this week, when video surveillance clips showed him entering a Hengdian hotel room to have sex with a woman. Yitian apparently has been involved with this woman for a year, and even cheated on his girlfriend. As details of Yitian’s scandal emerged, his image is hitting rock-bottom.

The 24-year-old actor shot to stardom after last year’s web series, A Love So Beautiful <致我們單純的小美好>, became a big hit. Cast in the upcoming Handsome Siblings <絕代雙驕>, the 6-feet-2-inch actor’s career seemed to be smooth sailing.  As one of the highest paid actors in Mainland China, Yitian commanded $50 million RMB in filming fees per project.

On June 14, a video clip of two men walking down a hotel hallway emerged. A tall man wearing a black jacket resembling Yitian stepped into a hotel room, which CCTV footage showed that a long-haired woman had previously entered earlier. The man wearing a white shirt, who is seen as Yitian’s assistant, quietly left the hallway. Yitian remained inside the hotel room with the woman for two hours.

Twenty-six-year-old Internet personality, known as Bei Ye Bei (邶也邶) on Weibo, admitted that she is the woman in the video surveillance clip. After the news broke, Yitian deleted her from his contacts list. Upset that he has dropped her so quickly, Bei Ye Bei released audio clips of their conversations, which were allegedly taped while they were in bed together. In the audio clips, a male voice resembling Yitian’s talked about a new recreational drug and also complained that his A Love So Beautiful co-star, Shen Yue (沈月) is unattractive.

Bei Ye Bei issued a statement stating, “I’m the woman in the video clip. The incident is true and I’m willing to take legal responsibility.

“From the beginning of 2017 until June 2018, Hu and I were in contact with each other. In 2017, Hu texted me many times asking to meet up in the middle of the night, which I declined. I finally started having feelings for him in March 2018, but it’s not what the Internet said that I was there to just [sleep around]. I’ve expressed that I really fell for him.”

Hurt by Yitian’s cold attitude towards her since the scandal broke, Bei Ye Bei wrote, “I looked back at our text conversations in 2017, when he had a girlfriend and still asked me out. My heart is dead. Although I didn’t expect a lot from the start, but people will still lie to themselves when in love.”

Responding to backlash that she had plotted to trap Yitian from the start, Bei Ye Bei said, “It’s crazy to say that I was scheming this for months. Before he said he would come to my house; isn’t it more convenient to [film him in my home] instead?”

Bei Ye Bei admitted that she had poured her heart out to a close friend, who was upset by Yitian’s actions and decided to circulate the hotel video clip online.

Fans continued to harass Bei Ye Bei, with one especially vicious comment stating, “Look in the mirror; you’re so ugly and still so shameless. Even if it’s real, he only treats you like a [hooker].”

Angry by the comments, Bei Ye Bei felt it was necessary for her to spill her true relationship with Yitian. “After my explanation, I hope this matter stops here, but fans continued to insult me, my friends, and family. So I was forced to tell the truth.”

Hu Yitian has not responded to any press inquiries over the incident.