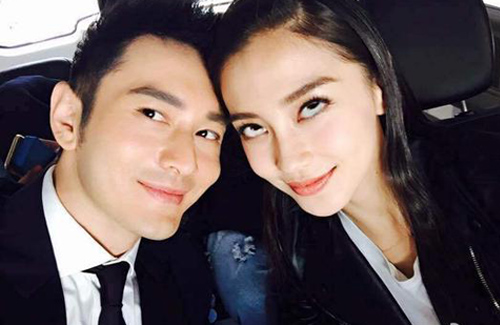 After dating for five years, Mainland Chinese actor Huang Xiaoming (黃曉明) and model-turned-actress Angelababy (楊穎) officially tied the knot in October last year. Despite the couple’s initial intentions to reduce their workload in order to spend more time together, they have been flooded with work after their wedding.

Currently busy filming for a new movie, Xiaoming revealed that he has only seen Angelababy fifteen days in nine months of marriage. He shared, “An opportunity to see each other is already a romantic thing for us.” Not only have they been unable to plan a honeymoon trip, the couple was only able to spend three days together for the Lunar New Year.

On whether he feels guilty about neglecting his wife, Xiaoming candidly admitted, “A little. She needs people to care for her. If she needs me, then I will immediately have to be there with her.”

Although Xiaoming stated his hopes to have children, his busy schedule has prevented him from spending quality time with Angelababy. He further revealed that his mother has also rushed them to have children. He joked, “[She said] having the more [children] the merrier. The best would be to have six and make it half a dozen!”