“I Will Always Be There for You”: Ruby Lin and Wallace Huo Tie the Knot in Bali 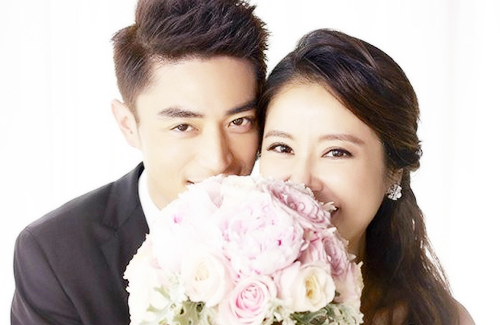 Ten years of friendship, ten years of love. On Sunday (July 31), 40-year-old Ruby Lin (林心如) and 36-year-old Wallace Huo (霍建華) walked down the wedding aisle at the Bulgari Hotels & Resort in the tropical island of Bali. The wedding commenced at approximately three in the afternoon. The bride wore a beautiful long-sleeved lace wedding gown with a plunging back line. All the guests and family members wore either white or beige. The groom, however, stood out among the sea of white with this black tuxedo.

When the couple were asked to exchange vows of love, Wallace laughed shyly and said, “I’ve known you for so long. At the time, I could only be your friend, but even so, I still felt very happy about it. Now, we have become husband and wife, and it’s something I feel even more blessed about. There will be more ups and downs in the future, and there will be even more obstacles that will test us, but I hope that, hand in hand, we can get through all of it together.”

Ruby said, “Thank you for being so good to me. Thank you for tolerating me and taking care of me. Starting today, we are family. Just like you said, there will definitely be many ups and downs in the future, but we will hold hands and face it together.” Holding back her tears, Ruby continued, “When you’re out and feel tired, exhausted, don’t forget that I will always be at home waiting for you. Forever. I love you.”

The newlyweds then held hands and, while holding back their tears, kissed each other on the lips. They held onto each other for at least five seconds. Ruby and Wallace were friends for over ten years before they finally got together earlier this year at Ruby’s birthday party. The Taiwanese superstars officially announced their relationship via social media on May 20, or “520”, which sounds similar to “I love you” when pronounced in Mandarin. When it was time for Ruby to toss her bouquet, Bingbing pounced out of her seat and ran for it. Hu Ge also jumped into the chaotic scene and tried to steal the bouquet!

At the evening reception later that night, Ruby changed into a slimmer cocktail dress for dinner. Though not many videos of their evening reception were leaked online, one leaked photo sees Bingbing speaking in front of the other guests while hugging Ruby tightly with tears in her eyes. Inside Ruby and Wallace’s Wedding:

61 comments to “I Will Always Be There for You”: Ruby Lin and Wallace Huo Tie the Knot in Bali