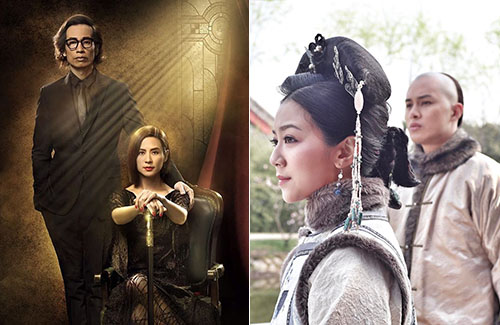 Now that The Unholy Alliance <同盟> has completed its broadcast, and Legal Mavericks <踩過界> is nearing the end of its run, it’s time for TVB’s traditional anniversary season of television dramas. 2017 is TVB’s 50th year since establishment, and the legendary Hong Kong station will be celebrating it with a total of six anniversary dramas this year. Picking up Line Walker: The Prelude’s timeslot will be the horror comedy The Exorcist’s Meter <降魔的>, which centers on a taxi driver who has the ability to see supernatural beings. TVB will be complementing the drama with a spin-off web series, which will air alongside the original show. Despite the show being aired during the anniversary lineup, it is not regarded as one of the seven 50th anniversary dramas. The Exorsist’s Meter stars Kenneth Ma (馬國明), Mandy Wong (黃智雯), Hubert Wu (胡鴻鈞), Moon Lau (劉佩玥), Ram Chiang (蔣志光), Susan Tse (謝雪心), Hugo Wong (黃子恆), Kitty Yuen (阮小儀), and King Kong Lee (金剛). It premieres October 30, 2017. The highly-anticipated thirdquel of the Heart of Greed <溏心風暴> trilogy is set to premiere sometime in November or December. The award-winning, record-breaking TVB television series will see the return of Best Actor and Actress winners Ha Yu (夏雨), Louise Lee (李司祺), and Michelle Yim (米雪) at the helm, bringing legend back to life. Though most of the older generation cast members will be returning, only Bosco Wong (黃宗澤) of the younger generation is returning. Costarring is Susanna Kwan (關菊英), Vincent Wong (王浩信), Priscilla Wong (黃翠如), Eliza Sam, Sharon Chan (陳敏之), Michael Tong (唐文龍), and Louis Yuen (阮兆祥). With such a long line of dramas waiting in line for broadcast, there is a high possibility that the TVB Anniversary Awards will be pushed back to January 2018.

TAGS: Deep in the Realm of Conscience, Heart of Greed 3, Line Walker: The Prelude, My Ages Apart, Oh My Grad, Succession War, The Exorcist's Meter, The Learning Curve of a Warlord