Is TVB Planning for an “Airport Strikers” Sequel? 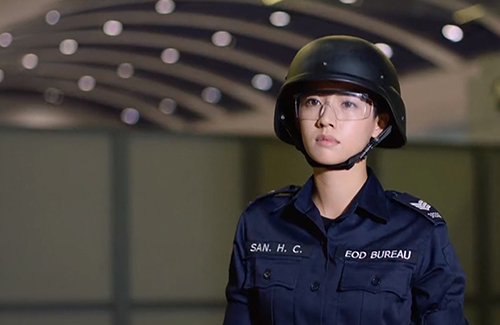 The final episode starts off with the fall of the drama’s final villain, Sung Tin-kei (Jack Hui 許家傑). Although Tin-kei was armed and could’ve killed him, Easy (Mat Yeung 楊明) still wanted a peaceful surrender. Hill (Owen Cheung 張振朗) takes down Tin-kei before he could fire his gun at Easy.

San Jai (Sisley Choi 蔡思貝) confesses her feelings for Hill, taking him off-guard. Although still at a loss at why Nana (Roxanne Tong 湯洛雯) had broken up with him, he realizes that he had also fallen for San Jai. At Keung (Jackson Lai 黎振燁) and Ah Sun’s (Winki Lai 賴慰玲) wedding, Hill sees Nana again, who tells him the reason why she had to break up with him. San Jai’s parents help her settle the regret she’s had about her brother’s death. Cesar (Hugo Wong 黃子恆) finally agrees to a divorce, and encourages Yan (Snow Suen 孫慧雪) to pursue her dreams. When they meet each other again by chance at the airport, Cesar sees that Yan is still wearing their wedding ring.

In the final minutes of the episode, San Jai is re-introduced to be a member of the Explosive Ordnance Disposal (EOD) Bureau, leading to the possibility of a direct sequel starring the same characters. Maybe TVB is considering to do a TV version of Andy Lau’s (劉德華) Shock Wave <拆彈專家>?

9 comments to Is TVB Planning for an “Airport Strikers” Sequel?