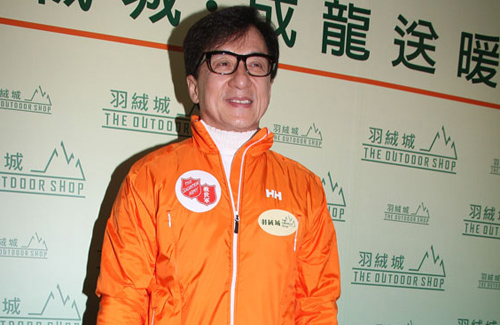 Jackie Chan (成龍) visited the Salvation Army yesterday to distribute down jackets for the elderly. Currently busy with the Southeast Asian promotions for his new action film Dragon Blade <天將雄獅>, which also costars John Cusack, Adrien Brody, and Choi Siwon (崔始源), Jackie has been working on overdrive with barely enough time to sleep in the last few weeks. He disclosed that he will be spending Lunar New Year in Mainland China, promoting the film.

With Valentine’s Day in one week, Jackie was asked if he had prepared anything for his wife, Joan Lin (林鳳嬌). Jackie laughed and said, “No. If I give her a present this year, I’m going to have to give her one every year. We should treat every single day as our Valentine’s Day and birthday.”

Jackie’s son Jaycee Chan (房祖名), who was sentenced to six months in prison for marijuana, will be released in one week. Asked if Jackie will go to Beijing to pick up his son when the time comes, Jackie shook his head and said, “No, I won’t. I don’t even know when he’s going to be released. [The media] knows more about it than I do. I didn’t even go visit him.”

Jackie said Jaycee is a grown man and he should learn how to handle everything on his own, “I don’t want him to live in my shadows,” he said.

Asked how long it has been since he last saw Jaycee, Jackie said, “Sometimes we wouldn’t see each other for two years! Honestly, I am very relieved. [Prison] has matured him a lot, and I hope when he comes out, he’ll know how to face his future. I will not speak for him, but Joan and I will always be there to be his backup.”

As to whether a press conference will be held for his son’s release, Jackie said, “I want [Jaycee] to decide for himself.”

Showing clips of Jaycee in court, reporters remarked that Jaycee has been looking more handsome than before. Jackie then said, “Then he should stay [in jail] longer, punish him some more!”

Jaycee will be released before the Lunar New Year, in time to spend the holiday with his family, but Jackie said he will not be around, as he has to work on his new film.

Source: On.cc
This article is written by Addy for JayneStars.com.